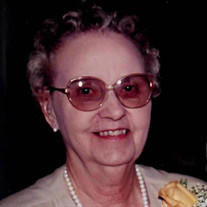 E. Jane Collett, 92, of Clarion, passed away early Thursday morning, April 18, 2019 at the Shippenville Healthcare and Rehabilitation Center. She was born on September 4, 1926 in Clarion; daughter of the late Chester E. McMillen, Sr. and Rose M. Wolfe McMillen. Jane married George H. Collett on July 12, 1952, and he survives. She worked as a bookkeeper for Owens Illinois Glass Plant, JCPenny’s, Coca-Cola, and last, Mark’s Auto Repair. Jane was a member of the Immaculate Conception Catholic Church in Clarion her whole life and was also a bookkeeper for the Cemetery. She is survived by her loving husband; two sons: Michael G. Collett and his wife Catherine of New Kensington and James D. Collett and his wife Elaine of Clarion, her daughter: Kathryn J. Morrison and her husband John of Shippenville; three grandchildren: Amanda Beckner of Virginia, Dr. Megan Collett of New Kensington, and David Collett of New Bethlehem; and five great grandchildren: Charles, Claire, Lucia, Francesca, and Ruby. Jane is also survived by her brother: Chester E. McMillen, Jr. and his wife Gerry of Limestone. She was preceded in death by her parents; two sisters: Dorothy C. Lander and Ruth M. Shingledecker and her two brothers: William N. McMillen and an infant brother: Thomas E. McMillen. There will be no public viewing. The family will receive friends at the Church. Mass of Christian Burial will be celebrated at 10 a.m. on Monday, April 22, 2019 at the Immaculate Conception Catholic Church in Clarion with Rev. Monty Sayers presiding. Interment will be held in the Immaculate Conception Catholic Cemetery. In Lieu of flowers, the family suggests donations be made in Jane's name to the Shippenville Healthcare and Rehabilitation Center, where she recieved such loving care over the past few months.

E. Jane Collett, 92, of Clarion, passed away early Thursday morning, April 18, 2019 at the Shippenville Healthcare and Rehabilitation Center. She was born on September 4, 1926 in Clarion; daughter of the late Chester E. McMillen, Sr. and Rose... View Obituary & Service Information

The family of E. Jane Collett created this Life Tributes page to make it easy to share your memories.

Send flowers to the Collett family.