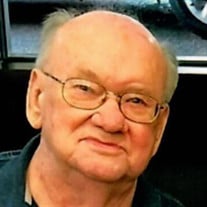 Sadly, on Thursday morning, March 19, 2020, we lost Earl E. Zerfoss of Clarion at the age of 83. He was born on September 3, 1937 in Stonycreek Township, Somerset County; son of the late Leroy Parker and Anna Ruth Zerfoss. Earl was a 1955 graduate of Shanksville-Stonycreek High School. After high school, Earl met the love of his life, LaVerne Albright, on June 27, 1959, and remained by her side through 49 years of thick and thin until her passing in 2008. He enlisted in the US Air Force and served for 4 years at Omaha Nebraska’s Offut A.F.B. (home of Strategic Air Command) “Once you get on it, you can’t get offut” as it was affectionately referred by servicemen. Earl was in charge of the in-flight kitchen, known as Crash and Fire Dining Hall. During his time in the A.F., he had the distinction of meeting Lyndon B. Johnson and his wife, Lady Bird Johnson, as well as John F. Kennedy. After his honorable discharge, Earl and LaVerne moved to Clarion in 1962. He was offered a general manager position at Howard Johnson’s motel chain and a general manager position of food service at the Clarion State College. Earl moved his family to Clarion and never looked back. He remained at Clarion University until his retirement in 1994. During Earl’s time in Clarion, he didn’t just sit around. He served on countless organizations. As a result of his hard work, he was named Citizen of the Year for his dedication. To name only a few organizations, Earl served on the Clarion Hospital Board of Directors, Clarion Little League, and his most treasured board, Clarion Borough Council. Earl was appointed to fill a vacancy in 1972 and remained active until a couple months ago when he bid farewell and took his final bow. He said “It is time for someone younger to take over.” During Earl’s time on council, he was proud to have served the residents in Clarion Borough. While his accomplishments were many, two usually came to mind when he spoke of his time on council: the starting of the Central County Ambulance Service, which later joined the Clarion Hospital, and the blocking of Main Street between 5th & 4th during A.L.F. He felt it was his responsibility for the safety of those enjoying the festival. He was a life-member of the American Legion Post #66 of Clarion and the Kiwanis. Earl was an avid supporter of the police department, public works, and the volunteer fire department. He “went to bat” on a number of occasions in defense of the firemen, police, and maintenance. Earl believed it was those professions that make a big difference in the Borough of Clarion, and to them, he owed his gratitude. Earl was also a HUGE proponent of stop signs, saying “I never saw a stop sign I didn’t like.” So for all of you in Clarion, you can thank him for having to stop at almost every block. He is survived by his three children: Lethia and John Seitz, Dawn and Lance Reed, and Shawn and Amy, all of Clarion; ten grandchildren: David and Amanda Collett, Anna Reed, Buddy and Alyssa Reed (Air Force), Leroy and Amanda Reed (Air Force), Lexi and Andrew Harbaugh, Aaliya Reed and her significant other, George Strauser, Madison and Zach Graham (Air Force), Mikey McClain and Kylie Hannold, Cora Zerfoss, and Brendan Zerfoss; and nine great grandchildren: Ruby Collett, Parker, Keylee, and Tanner Reed, JoJo and Hunter Reed, Eli and Grayson Harbaugh, and Jaxson Strauser. Earl is also survived by his sister: Judy; and numerous nieces and nephews. He was preceded in death by his parents; loving wife; his sons-in-law: Kevin “Moose” McClain and Jim Collett; his brothers: Don and Fred; and his sisters: Ruth and Louis. Due to the current coronavirus pandemic, a private family viewing will be held at the Robert V. Burns Funeral Home in Clarion, followed by a service with Rev. Monty Sayers, pastor of the Immaculate Conception Catholic Church in Clarion. A public Memorial Service, honoring Earl, will be held at a later date when the coronavirus restrictions are lifted. Interment will be held at the Cedarview Memorial Park in Strattanville. Earl wanted a party to celebrate his life…don’t let him down. Out of Earl’s great respect for the Clarion Volunteer Fire Department, he asks donations be made to the Clarion Fire and Hose Company #1, 525 Wood Street, Clarion, PA 16214, where your contributions will go to help save those in need.

Sadly, on Thursday morning, March 19, 2020, we lost Earl E. Zerfoss of Clarion at the age of 83. He was born on September 3, 1937 in Stonycreek Township, Somerset County; son of the late Leroy Parker and Anna Ruth Zerfoss. Earl was a 1955 graduate... View Obituary & Service Information

The family of Earl E. Zerfoss created this Life Tributes page to make it easy to share your memories.

Send flowers to the Zerfoss family.