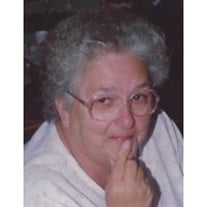 Edith J. Kitchen, 83, of Clarion, passed away on Friday, April 21, 2017 at the Clarion Health Care Center. She was born on March 14, 1934 in Strattanville, daughter of the late Robert E. and Floda P. Kinch Gates. Edith was married to Sheridan L. Kitchen on July 23, 1955, and he preceded her in death on January 6, 2009. She was a homemaker. Edith was a life member of the American Legion Women’s Axillary Strattanville Post. Edith enjoyed Bowling, going to the Pocono Raceway, and loved Dale Earnhardt, riding motorcycles, camping, picnicking, and trips to Erie to get her hair styled by her niece, Patti Zelina. While living at the nursing home she enjoyed Bingo, Socializing with other residents, and the company of her roommate, Rose. She especially enjoyed going to the ALF parade with her brother, Boots. The family would like to give a heartfelt thank you to the staff at the Clarion Health Center and Dr. Randy Krieder. Edith will be dearly missed be her family and friends. She is survived by two sons, Bill Kitchen and wife Valarie of Knox and Don Kitchen and wife Lori of Miola, two daughters, Deb Roller and husband Chester of Clintonville and Donna Horner and husband Chris of Clarion, seventeen grandchildren, and nineteen great grandchildren, one sister, Harriet Songer of Corsica, and one brother, Harry Boots Gates and his wife Janice of Ohio. Edith is preceded in death by her parents, husband, and siblings, Pete, Marie, Carl, Harold “Ding”, and Louise. Family will receive friends from 1 p.m. to 4 p.m. and 6 p.m. to 8 p.m. Monday, April 24, 2017 at the Robert V. Burns Funeral Home in Clarion. Funeral Services will be held at 11 a.m. Tuesday, April 25, 2017 in the Funeral Home with Rev. Bruce Wilson, pastor of the Trinity Point Church of God. Interment will follow in the Cedarview Memorial Park in Strattanville.

Edith J. Kitchen, 83, of Clarion, passed away on Friday, April 21, 2017 at the Clarion Health Care Center. She was born on March 14, 1934 in Strattanville, daughter of the late Robert E. and Floda P. Kinch Gates. Edith was married to Sheridan... View Obituary & Service Information

The family of Edith J. Kitchen created this Life Tributes page to make it easy to share your memories.

Send flowers to the Kitchen family.