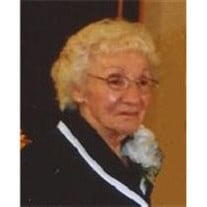 Edith Mae Rupp Milliron Weaver, 90, of Limestone Township, Clarion, died Friday, October 12, 2012, at her home. Born May 2, 1922, in Armstrong County; she was the daughter of Marlin McConnell and Stella Mae Smith Rupp. Edith was first married to John Milliron, he preceded her in death on February 3, 1948.  She was then married on February 6, 1950 to William Harold Weaver, and he preceded her in death on April 18, 1990. She retired from the Owens-Illinois Glass Plant after working 17 years. Edith was a hard worker.  She enjoyed traveling, doing yard work, and going out to eat.  She dearly loved her grandchildren and great grandchildren. She is survived by four daughters, Shirley Orcutt and her husband, Barry, of Corsica, Verna Lee Foringer and her husband, Richard, of New Bethlehem,  Esther Villella and her husband, Tony, of Punxsutawney, and Betty Eshbaugh and her husband, Dave, of Summerville; 16 grandchildren, two step grandchildren, 23 great grandchildren, and three great great grandchildren. Also surviving is a brother, Stanley “Tim” Rupp of California. In addition to her parents and husbands, she was preceded in death by a daugher, Lois L. Himes; three brothers, Barney Rupp, Paul Rupp, and Dean Rupp; two sisters, Esther Shumaker and Pearl Rupp; and a grandson, Richard Foringer. Family will receive friends from 10 to 11 a.m. on Monday, October 15, 2012, at the Kingsville United Methodist Church. Funeral services will be held at 11 a.m. on Monday, October 15, 2012, at the Kingsville United Methodist Church with Pastor William Saxman, pastor of the Kingsville United Methodist Church, officiating. Interment will be held in the Cedarview Memorial Park in Strattanville. Arrangements are being handled by the Robert V. Burns Funeral Home, 638 Wood Street, Clarion. Memorials and donations can be made to the Kingsville United Methodist Church, 71 C-L School Road, Summerville PA 15864; or VNA Hospice, 271 Perkins Drive, Clarion PA 16214.

The family of Edith M. Weaver created this Life Tributes page to make it easy to share your memories.

Send flowers to the Weaver family.