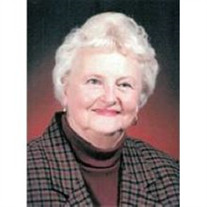 Edna M. Hartle, 82, of Liberty Towers, Clarion, died Monday, July 6, 2009, at her residence.  She was the last survivor of her family. Born May 7, 1927, in Venango County, she was the daughter of Harry M. Masters and Allie M. Dunham Masters Benninger. Mrs. Hartle was married on July 3, 1948 to Charles “Rich” Hartle, who preceded her in death on May 13, 1977. She worked for G.C. Murphy Co.  After retiring, she babysat her great nieces, Sarah and Rachael Magrini. Mrs. Hartle attended the Strattanville United Methodist Church. She was past President of Liberty Towers. Mrs. Hartle loved crafts and her cat, Patches, and spending time with her grandchildren and great grandchildren. She was survived by two children, Douglas R. Hartle and wife, Jolene, of Lucinda; and Connie M. Greenawalt and husband, Pete, of Sligo; five grandchildren, Matt Greenawalt and wife, Jody, of Kane; Mindy Greenawalt and Scott Jones, of Callensburg; Clint Hartle and wife, Sara, of Parrish, FL; Shane Hartle of Williamsport; and Marlie Hartle of Lucinda; five great grandchildren, Rodney Jones, Charlynn Jones, Justin Jones, Griffin Greenawalt, and Kamryn Greenawalt. Also surviving are a number of nieces and nephews. In addition to her parents and husband, she was preceded in death by her step-father, Nathaniel Benninger; two brothers, Robert and Mel Masters; one sister, Leona Beichner; and one step-sister, Alberta Haskell. Family will receive friends from noon to 2 p.m. on Friday, July 10, 2009, at the Robert V. Burns Funeral Home in Clarion. Memorial service will be held at 2 p.m. on Friday, July 10, 2009, in the funeral home. Interment will be held in the Immaculate Conception Cemetery. Donations can be made to a charity of one’s choice.

The family of Edna M. Hartle created this Life Tributes page to make it easy to share your memories.