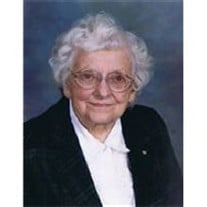 Edna L. Hubauer, 95, of South 5th Ave, of Clarion, died Friday, December 4, 2009, at the Golden Living Center in Shippenville. Born on February 7, 1914, in Yatesboro, PA, she was the daughter of Albert and Ida Donahue Schrecengost. Mrs. Hubauer was married on November 25, 1934 to Michael S. Hubauer, who preceded her in death on 1970. She graduated from Clarion Area High School. Mrs. Hubauer worked in the dietary department at the Grandview Nursing Home. She was a member of the Immaculate Conception Church in Clarion where she was also a member of the Alter Society, Ladies Guild, R.C.I.A., and also Eucharistic Minister. Mrs. Hubauer enjoyed sewing and gardening and was a great quilter. She is survived by her daughters, Marion C. English and husband, Richard, of Oil City; and Evelyn M. Kennemuth of New Bethlehem; 12 grandchildren; 21 great grandchildren, and 9 great great grandchildren. Also surviving are sisters, Ethel Walter and Annabelle Mock, both of Clarion. In addition to her parents and husband, she was preceded in death by one daughter, Dorothy Snyder; one grandson, Richard M. English; four brothers, Harold Schrecengost, Arnold Schrecengost, Russell Schrecengost, and Raymond Schrecengost; and one sister, Geraldine Wilshire. Family will receive friends from 2 to 4 p.m. and 7 to 9 p.m. on Sunday, December 6, 2009, at the Robert V. Burns Funeral Home in Clarion. Christian Wake Service will be held at 8:30 p.m. on Sunday, December 6, 2009, in the funeral home. Mass of Christian Burial will be held at 11 a.m. on Monday, December 7, 2009, at the Immaculate Conception Church in Clarion with Rev. Monty Sayers, pastor of the Immaculate Conception Church, presiding. Interment will be held in the Immaculate Conception Cemetery in Clarion.

The family of Edna L. Hubauer created this Life Tributes page to make it easy to share your memories.

Send flowers to the Hubauer family.