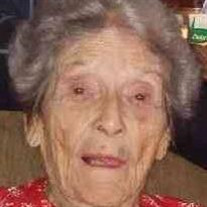 Edna R. McCleary, 93, of Corsica, formerly of Miola, passed away on Thursday, November 2, 2017 at her daughter’s home where she had been living. She was born on September 9, 1924 in Miola; daughter of the late Orlie F. and Orpha Whisner Dolby. Edna married Fred L. McCleary in October of 1941, who preceded her in death. She worked at Scotty’s Restaurant in Cooks Forest and at the Vowinkel Hotel where she was a waitress in her early years. Edna was a former member of the Clarion Moose Lodge #101 and a member of the Stitch & Chatter Club. She enjoyed crocheting, knitting, crafts, and quilting. She is survived by her children, Fredrick McCleary and his wife Diane of Etters, John McCleary and his wife Terri of North Carolina, and Deborah Clinger of Corsica, twelve grandchildren, seventeen great grandchildren, and two great great grandchildren. Edna is also survived by a son-in-law, John Wright of Miola and a sister-in-law, Betty Milanovich of Rimersburg. She was preceded in death by her parents, husband, one daughter, Diane Wright, a son-in-law, George Clinger, a granddaughter, Amy Clinger, two brothers, Francis Dolby and Emerson “Pete” Dolby, and one sister, Maxine Slicker. Family will receive friends from 1 p.m. to 4 p.m. on Sunday, November 5, 2017 at the Robert V. Burns Funeral Home in Clarion, where services will follow at 4 p.m. in the Funeral Home with Rev. Sarah Sedgwick, Chaplin of the Community Nurses Hospice. Interment will be held in the Miola Cemetery.

Edna R. McCleary, 93, of Corsica, formerly of Miola, passed away on Thursday, November 2, 2017 at her daughter&#8217;s home where she had been living. She was born on September 9, 1924 in Miola; daughter of the late Orlie F. and Orpha Whisner... View Obituary & Service Information

The family of Edna R. McCleary created this Life Tributes page to make it easy to share your memories.

Edna R. McCleary, 93, of Corsica, formerly of Miola, passed away...

Send flowers to the McCleary family.