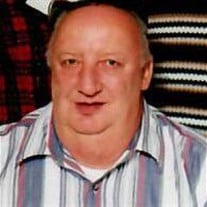 Edward W. “Body Man” Fryer, 82, of Strattanville, passed away unexpectedly Tuesday morning, January 21, 2020 at his home. He was born on April 4, 1937 in Mayport; son of the late Ivan B. and Harriet D. Miller Fryer. Ed married his high school sweetheart, Elva Kay Walter, on August 31, 1955; whom survives. He started out driving dump truck for his father-in-law and he spent the majority of his life in the seat of a truck hauling everything from logs to blacktop. You couldn’t go anywhere with him that he didn’t say “Look there, I used to haul out of there.” Ed also had an Auto Body & Paint Shop, which earned him the handle “Body Man”. He attended the Pisgah Presbyterian Church in Corsica. Ed enjoyed gambling, playing the lottery, buying and selling coins, and cars, especially Fords. He loved getting together with his family and cooking out. Everyone knew Ed as a great joke teller. Ed is survived by his loving wife: Kay; three children: Deborah K. Smith and her husband, Jack, of Fisher, Edward D. Fryer and his wife, Trudy, of Strattanville, and Patricia F. Renninger and her husband, Steve, of Corsica; six grandchildren: John W. Smith and his wife, Steph, of Fisher, Steven E. Renninger and his wife, Maria, of Brookville, Joey N. Bailey and her husband, Marc, of Hazen, Partick R. Renninger and his wife, Jill, of Brookville, and Joshua D. Fryer and Alexandria J. Fryer, both of Strattanville; and nine great grandchildren: Braden W. Smith, Karley Renninger, Riley Renninger, Kayla McHenry, John McHenry, Hunter Bailey, Kylie Garvey, Chloe Garvey, and Brycen Renninger. He is also survived by his brother: Dale Fryer of Brookville; his sister: Jean Knapp of Strattanville; two sisters-in-law: Glennie Campbell and her husband, Wayne, and Blue Hannold and her husband, Web; three brothers-in-law: Tom Walter and his wife, Carol, Ron Walter and his wife, Shirley, and PL Walter and his wife, Martha; and numerous nieces and nephews. Ed was preceded in death by his parents and a brother: William Fryer. The family will receive friends from 2 p.m. to 4 p.m. and 6 p.m. to 8 p.m. on Thursday, January 23, 2020 at the Robert V. Burns Funeral Home in Clarion. Additional viewing will be held on Friday, January 24, 2020 from 10 a.m. to 11 a.m. at the Pisgah Presbyterian Church in Corsica, where funeral services will follow at 11 a.m. with Rev. James Dietrich presiding. Interment will follow in the Pisgah Presbyterian Cemetery.

The family of Edward W. Fryer created this Life Tributes page to make it easy to share your memories.

Send flowers to the Fryer family.