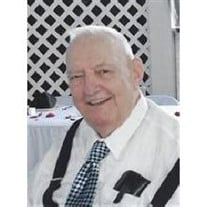 Edward J. Lahr, 89 of Clarion, passed away Tuesday, February 5, 2013 at his home. Born January 18, 1924 in Lucinda; he was the son of Frank X. and Theresa B. Hufner Lahr. He was married on September 24, 1946 to the former Marie B. Smith, who survives him. Ed was a decorated WWII veteran who served in the U.S. Navy as a flight engineer from 1941 to 1947. His was lost at sea for 3 days after his plane was shot down in the South Pacific. While in the Navy, Ed fought the Golden Gloves in Chicago, he was an avid hunter & fisherman who loved spending time at his camp at Kinzua. He worked for the Clarion Borough Police Department for 27 years and served as Chief of Police, where he retired from in 1981. Ed was a member of the Immaculate Conception Church in Clarion and a member of the American Legion Post 66 of Clarion. Ed was also a past member of the Clarion Fire Department for many years. In addition to his wife Marie, he is survived by four children, Steven J. Lahr and his wife, Susan, of Powder Springs, GA; Bernard C. Lahr and his wife, Kathy, of Brunswick, GA; Rita J. Over and her husband, Joe, of Clarion and Susie Lahr of Mechanicsburg, PA; five grandchildren, Jason Lahr (Krista Hoefle) of South Bend, IN; Melissa Lahr of Atlanta, GA; Stephanie Kerse (Ryan) of Dallas, GA; Rikki Over of Sewickley, PA and Renee Miller (Matt) of McGuire AFB, NJ; and two great grandsons Gabe Kerse and Carsten Miller. He is also survived by two sisters, Dorothy Glosser of Youngstown, OH and Agnes Weir of Williamsport, PA; two sister-in-laws, Shirley Lahr, Shippenville and Lois Lahr, New Castle. He is preceded in death by his parents; a son, Richard E. Lahr; three brothers, Andrew V. Lahr, Charles E. Lahr, James F. Lahr; and five sisters, Mary Plyler, Sister Genevive Lahr, OSB, Philamino Burge, Helena Drayer and Thecla Drayer. Family will receive friends from 2 to 4 p.m. and 7 to 9 p.m. on February 7, 2013, at the Robert V. Burns Funeral, 638 Wood Street, Clarion PA 16214. Christian wake service will be held at 3:45 p.m. on Thursday, February 7, 2013, in the funeral home. Military honors will be accorded by American Legion Post 66 at 10:15 a.m. on Friday, February 8, 2013, at the funeral home. A Mass of Christian Burial will be celebrated at 11 am on Friday, February 8, 2013, at the Immaculate Conception Church in Clarion with the Rev. Monty Sayers presiding. Interment will be held in the Immaculate Conception Cemetery. In lieu of flowers memorials can be sent to the Clarion Forest VNA, Inc. at 271 Perkins Road, Clarion, PA 16214.

The family of Edward J. Lahr created this Life Tributes page to make it easy to share your memories.

Send flowers to the Lahr family.