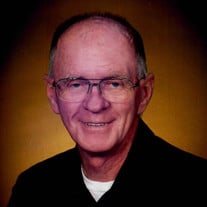 Edward A. “Ed” Stevens, 82, of Rimersburg, passed away Monday evening, September 13, 2021 at the Clarion Hospital due to complications from a stroke. He was born on December 24, 1938 in Butler; son of the late John H. and Flora M. Flick Stevens. Ed was a Union High School graduate. He worked for R & P Urling 3 Coal Company in Shelocta for numerous years and then worked for Union School District as a Custodian until he retired. Ed proudly served in the US Army. He was a member of the United Methodist Church in Rimersburg. Ed was also a member of the Masonic Lodge and the Rimersburg Community Club. He enjoyed woodworking, hunting, and daily trips to Dollar General with his girls, Emerson and Bailey. Ed always had the willingness to help anyone in need. He touched many people in the community through his woodworking skills and his generosity during the Christmas season. He is survived by his two daughters, Jodi Cicciarelli and her husband, Jamie, of Sligo and Julie King of Reynoldsville; his son, John Stevens and his wife, Shana, of Rimersburg; six grandchildren, David Corle, Trish Bish and her fiancé, Jeff, Haley Durci and her fiancé, Trey, Zach Dotterer and his significant other, Randie, Emerson Stevens, and Bailey Stevens; and several great grandchildren. Ed is also survived by his lifelong companion, Janet Divins of Rimersburg and her two children, Barry Divins and his wife, Sue, and their family and Kelly Turner and her husband, Dan, and their family. In addition to his parents, Ed was preceded in death by his sister, Ellen Lindquist. The Burns Funeral Home & Crematorium, Inc. in Rimersburg is handling the arrangements. At Ed’s request, there will be no public visitation. A celebration of life will be held at a later date. Interment will take place in the Rimersburg Cemetery. In lieu of flowers, memorials or donations can be made in Ed’s name to the Hope For Your Future, PO Box, 643, Rimersburg, PA 16248.

The family of Edward A. Stevens created this Life Tributes page to make it easy to share your memories.

Send flowers to the Stevens family.