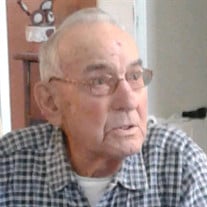 Edwin C. “Ed” Wolbert, 90, of Lucinda, passed away early Friday morning, February 7, 2020 at the Clarion Hospital. He was born on June 7, 1929 in Snydersburg; son of the late Leonard and Charlotte Schmader Wolbert. Ed was the last remaining member of his family. He married the former Elizabeth I. “Betty” Hepfl on June 10, 1952; whom preceded him in death on April 24, 2018. He served in the US Army during the Korean War. Ed worked as a tree cutter for Morris Lumber Company in Ohio for over 30 years. He then worked for C & K Coal Company in Clarion as an Oiler until he retired. He was a member of the Immaculate Conception Catholic Church in Clarion. Ed was also a life member of the Knights of Columbus. He enjoyed crossword puzzles and spending time with his grandchildren and great grandchildren. Ed is survived by his daughter: Cindy Green and her husband, Ed, Clarion; two sons: Ed Wolbert, Jr. and his wife, Denise, of Murrysville and Randy “Snuff” Wolbert and his wife, Judy, of Corsica; eight grandchildren: Jonathan, Jessica, Jason, Emily, Sarah, Randy, Jr., Liz, and Sean; eight great grandchildren; and a close friend and neighbor: Terry Aites of Lucinda. He was preceded in death by his parents; loving wife; and nine siblings: Gerve, Claude, Lucille, Mercedes, Vincent, Roy, Shirley, Leonard, and Jane. The family will receive friends from 11 a.m. to 1 p.m. on Monday, February 10, 2020 at the Immaculate Conception Catholic Church in Clarion. Mass of Christian Burial will follow at 1 p.m. in the church with Rev. Monty Sayers pastor presiding. Interment will follow in the Saint Joseph Catholic Cemetery in Lucinda.

The family of Edwin C. Wolbert created this Life Tributes page to make it easy to share your memories.

Send flowers to the Wolbert family.