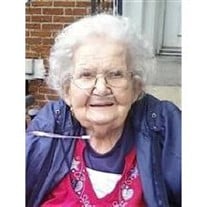 Elaine Jeanette Jaquish Kroh passed away on Sunday, July 7, 2013 after a brief illness.  She celebrated her 90th birthday in February. Elaine was born in Tunkhannock, PA, on February 5, 1923, the third child and first girl of Mabel Robbins and John J. Jaquish, who was a county agent.  Elaine believed all her life that Tunkhannock was a superior place to live and that she had been raised in the best family. She graduated from Keystone College and Mansfield College. She was in college during World War II.  Elaine moved to Clarion in 1945 to work as a home economist in Clarion County.  She soon met a handsome serviceman named Jack Kroh, and they were married on May 18, 1950. Jack preceded Elaine in death, passing away in 2003. She will be missed by her children, Leslee Kroh Clapp and her husband, Roger, of Clarks Summit, PA; Judy Kroh Baca and her husband, Dino, of New Columbia, PA; and Jack Kroh and his fiancée, Tina Eggers, of Oil City, PA. Elaine will be remembered fondly by her former daughter-in-law and friend, Kathy Strotman Kroh.  She will be missed by her grandchildren, David and Jennifer Heffner Clapp of Lubbock, TX;  Margaret Clapp Littleton and Jesse Littleton of New Paltz, NY; Andrea Clapp of Scranton, PA; Allison Baca Krabill and Joshua Krabill of Roanoke, VA; Erin Kroh, fiancée of Joshua  Frederick of Tylersburg, PA; and Dan Kroh and Sheryl Slater, the parents of Elaine’s great-grandson, Jack, of Fertigs, PA.   Elaine has many nieces and nephews who remember her knitted dish towels, Rice Krispie treats, and how much she loved the Pirates, Steelers, and Autumn Leaf Festival.   Elaine was an avid bridge player and an excellent seamstress.  She loved her dogs and knitting, but most of all she loved visits from family members who stopped by in Clarion or Buffalo Valley.   She was a polling place judge for many years at her post in the Clarion Volunteer Fire Company, and fed the other officials many homemade cookies. Elaine will be missed by the many wonderful people at Buffalo Valley Lutheran Village in Lewisburg, PA, where she was a resident for the last three years. Visitation will be held in Watsontown from 1 to 2 p.m. on Wednesday, July 10, 2013, at the Watsontown Alliance Church, with funeral services at 2 p.m. with Rev. Donald Jones, pastor of the Watson Alliance Church, officiating. Also visitation will be held in Clarion from 10 to 11 a.m. on Thursday, July 11, 2013, at the First United Methodist Church with  funeral services at 11 a.m. with Rev. Arnie Rhodes officiating. Interment will be held in Clarion Cemetery. In lieu of flowers, the family asks friends to consider donations to Buffalo Valley Lutheran Village, 889 Fairground Rd., Lewisburg, PA 17837.

Elaine Jeanette Jaquish Kroh passed away on Sunday, July 7, 2013 after a brief illness. &#160;She celebrated her 90th birthday in February. Elaine was born in Tunkhannock, PA, on February 5, 1923, the third child and first girl of Mabel Robbins... View Obituary & Service Information

The family of Elaine J. Kroh created this Life Tributes page to make it easy to share your memories.

Send flowers to the Kroh family.