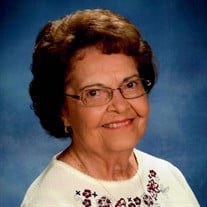 Elizabeth M. “Betty” Aaron, 88, of Crates, passed away Thursday evening, May 17, 2018 at the Penn Highlands Hospital in Brookville. She was born on March 7, 1930 in Howe, PA; daughter of the late Boyd A. and Amanda N. Dodson Lyle. Betty graduated from Clarion Limestone High School in 1948. She married Donald J. Aaron on November 12, 1948, and he preceded her in death on July 25, 2009. Betty worked at Owen’s Illinois Glass Plant in Clarion for twenty-three years, retiring in 1992. She was a member of the Saint Nicholas Catholic Church in Crates. Betty enjoyed horses, flowers, traveling, and crocheting. She is survived by one son, Donald S. Aaron and his wife Rhonda of Kingsville, two grandsons, Robert D. “Bobo” Aaron and his wife Ricci and James D. “Peep” Aaron and his wife Candi all of Kingsville, and four great granddaughters, Audrey, Caitlin, Addison, and Aubriana all of Kingsville. Betty is also survived by one brother, Boyd Lyle of Sigel, two sisters, Lois Jean Leadbetter of Crates and Mildred Stahlman of Colorado, two brothers-in-law, Leonard Aaron and his wife, Mona of Shippenville and Paul Aaron and his wife Tina of South Carolina, and two sisters-in-law, Lois Hersey of Strattanville and Shirley Drew of Kentucky. She was preceded in death by her parents, husband, a son, David, and two brothers, Arthur and Robert. Betty’s family will receive friends from 1 p.m. to 4 p.m. on Sunday, May 20, 2018 at the Robert V. Burns Funeral Home in Clarion. Mass of Christian Burial will be celebrated at the Saint Nicholas Catholic Church in Crates on Monday, May 21, 2018 at 11 a.m. with Rev. Samuel Bungo, presiding. Interment will follow in the Saint Nicholas Catholic Cemetery. Memorials or donations can be made in Betty’s name to the American Legion Post #66 Scholarship Fund.

The family of Elizabeth M. Aaron created this Life Tributes page to make it easy to share your memories.

Send flowers to the Aaron family.