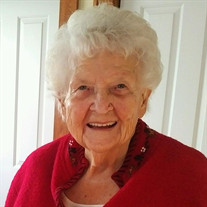 Elma P. Wakefield, 95, of Clarion, passed away on Thursday, January 24, 2019 at the Clarion Healthcare and Rehabilitation Center, three days prior to her 96th birthday. She was born on January 27, 1923 in Blairsville; daughter of the late Paul and Flora Thompson Waugaman. Elma graduated from the Indiana Teacher’s College in 1949 and remained an active IUP Alumni. She married Jake Wakefield on June 1, 1953, and moved to Robinson, PA (Indiana County). He preceded her in death. Elma was a retired Elementary School Teacher at Ligonier School District. Her faith was very important to her. Elma was currently a member of the Grace Lutheran Church in Clarion. She previously was a member of the Hebron Lutheran Church in Blairsville and Zion Lutheran Church in Robinson, PA. Elma was also a member of the Order of Eastern Star in Latrobe, PA. She was an avid Steelers fan. Elma actively participated in the Ligonier and Clarion YMCAs, T.O.P.S., and Silver Sneakers. Additionally, she was well known for her cookies and affectionately known to most as Grandma Wakefield. Elma enjoyed traveling near and far with her family and friends. She is survived by her two daughters, Cynthia Beary and her husband Richard “Curly” of Clarion and Paula Kuzma of Johnstown; her grandson, Craig Beary and his fiancé Melinda Warnsing; and numerous nieces and nephews. Elma was preceded in death by her parents; her husband, Jake; her four brothers, Charles, John, Donald, and Paul Waugaman; her eight sisters, Sara Waugaman, Dorothy Campbell, Ruth Ryder, Leila Hodges, Julia Ricca, Patricia Layton, Nettie Catherine Waugaman, Flora Belle Waugaman, and Carolyn Sherrill; and her son-in-law, Paul Kuzma. The family will receive friends from 10 a.m. to 11 a.m. on Saturday, January 26, 2019 at the Grace Lutheran Church in Clarion, where Funeral Services will immediately follow at 11 a.m. in the Church with Rev. Harold Jacobson, pastor presiding. Interment will be held in the Blairsville Cemetery. The Robert V. Burns Funeral Home in Clarion is handling the arrangements. In Lieu of flowers, the family suggests donations to the Clarion Forest V.N.A & Hospice, 271 Perkins Road, Clarion, PA 16214, the Clarion Healthcare and Rehabilitation Center, 999 Heidrick Street, Clarion, PA 16214, or to a Charity of one’s choice.

Elma P. Wakefield, 95, of Clarion, passed away on Thursday, January 24, 2019 at the Clarion Healthcare and Rehabilitation Center, three days prior to her 96th birthday. She was born on January 27, 1923 in Blairsville; daughter of the late Paul... View Obituary & Service Information

The family of Elma P. Wakefield created this Life Tributes page to make it easy to share your memories.

Elma P. Wakefield, 95, of Clarion, passed away on Thursday, January...

Send flowers to the Wakefield family.