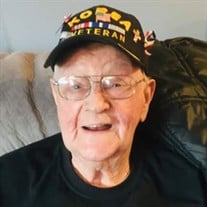 Emery A. Young, 87, of Strattanville, passed away Sunday evening, April 12, 2020 at the Clarion Hospital. He was born on May 2, 1932 in Oak Ridge; son of the late Robert William and Carrie Bish Young. Emery was the last surviving member of his immediate family. Emery worked for the State Highway and retired from Conrail. He served in the United States Army during the Korean War. Emery was very proud of his time spent in the Army. He was a member of the Williamsburg Community Bible Church. Emery was also a member of the Strattanville American Legion Post #249. He enjoyed fishing, hunting, tinkering around, and spending time with his grandchildren. Anybody who knew Emery, knew he was a jokester. He always had a good story to tell you and left you with a smile. Emery is survived by his three daughters: Ella Croy and her husband, Ron, of Roseville, Ruth Ann Alden and her husband, Vern, Jr., of Clarion, and Martha Booth and her husband, Bill, of Fisher; five grandchildren: Todd Matthews and his wife, Angi, Stacy Lambert and her husband, Jim, Becky Myers and her husband, Doug, Kayla Grant and her husband, Jeremy, and Ryan Booth; and seven great grandchildren: Brianna and Brandon Matthews, Taylor and Travis Devey, and Audrey, Rebecca, and Emery Grant. He was also survived by a sister-in-law: Prudy Young of Clarion; a brother-in-law: Dick Hollobaugh of Distant; numerous nieces and nephews: and a special great niece: Jordyn Smith. Emery was preceded in death by his parents; five brothers: Russell E. Young, Robert D. Young, William V. Young, Harry W. “Son” Young, and Hilton C. “Buck” Young; and two sisters: Helen M. Daly and Francis M. Hollobaugh. A private family viewing will be held at the Robert V. Burns Funeral Home in Clarion. A private family funeral will be held at 11 a.m. on Wednesday, April 15, 2020 with Emery’s nephew, Rev. Tom Young, pastor of the Williamsburg Community Bible Church. For extended family members and friends, a livestream of Emery’s funeral can be viewed on the Burns Funeral Homes facebook page. Interment will follow in the Cedarview Memorial Park in Strattanville. In lieu of flowers, Donations can be made in Emery’s name to the Williamsburg Community Bible Church, 21456 Route 68, Clarion, PA 16214 or to the Clarion Forest VNA, 271 Perkins Road, Clarion, PA 16214.

Emery A. Young, 87, of Strattanville, passed away Sunday evening, April 12, 2020 at the Clarion Hospital. He was born on May 2, 1932 in Oak Ridge; son of the late Robert William and Carrie Bish Young. Emery was the last surviving member of his... View Obituary & Service Information

Emery A. Young, 87, of Strattanville, passed away Sunday evening,...