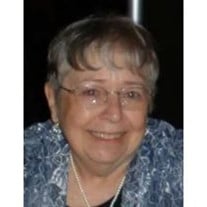 Emma Jean Fiscus, 80, of Kingsville passed away peacefully on Thursday, August 11th, 2016 at the Brookville Hospital. She was born on June 11th, 1936 in Kane; the daughter of the late George and Grace Covel Smith. Jean grew up in Marienville and graduated from the Marienville High School. She also graduated from the Oil City School of Nursing, then worked as a Registered Nurse at the Brookville Hospital and as a school nurse for the Clarion-Limestone School District. Jean was married to William C. Fiscus in May of 1959, who was a member of the Pennsylvania State Police. They started their family in Pittsburgh then moved to Greensburg followed by a move to Indiana and then Ebensburg. They moved to Clarion in 1965 and then to Kingsville in 1966. As a dedicated and loving member of the Kingsville United Methodist Church, Jean was the originator and publisher of The Seed, the church newsletter which has been published for the last 20 years. Jean was a devoted Sunday School Teacher, choir member, and Vacation Bible School Coordinator. She greatly enjoyed attending all the religious events with the Kingsville United Methodist Church. She will be remembered for her strong conviction to following Christ and walking in the Lords footsteps. She was also a member of the Morris Chapter of the Order of the Eastern Star. Jean is survived by her loving husband William and her children: Jeff (Theresa) Fiscus (Grandson Matt (Ashley) and great grandchildren Gabriele, Hailee, Hayden; Deb (Brad) Templeton (Grandsons Doug (Alicia) and Matt); Greg (Suzanne) Fiscus (Granddaughters Caroline (Billy) Wellman, Rebecca, and Hannah); Jon (Michel) Fiscus (Granddaughters Loren and Emilee, Grandson Zackary); and Daphne (JR) Himes (Granddaughter Meagan (Will) Hightower and Grandson Jesse (Marissa)), and brother James (Linda) Smith. Jean was preceded in death by her parents, her sister Betty Miller, and her brother William Smith. Family will receive friends from 1 p.m. to 3 p.m. and 5 p.m. to 7 p.m. on Sunday, August 14, 2016 at the Robert V. Burns Funeral Home, 638 Wood Street, Clarion, PA 16214. Funeral services will be held at 11 a.m. Monday, August 15, 2016 at the Kingsville United Methodist Church with Rev. Bill Saxman, pastor as presider. Internment will be at the Limestone Mt. Cavalry Cemetery. The family request that in lieu of flowers, memorial donations be made to the Kingsville United Methodist Church, 71 CL School Road, Summerville, PA 15864.

Emma Jean Fiscus, 80, of Kingsville passed away peacefully on Thursday, August 11th, 2016 at the Brookville Hospital. She was born on June 11th, 1936 in Kane; the daughter of the late George and Grace Covel Smith. Jean grew up in Marienville... View Obituary & Service Information

The family of Emma "Jean" Fiscus created this Life Tributes page to make it easy to share your memories.

Emma Jean Fiscus, 80, of Kingsville passed away peacefully on...

Send flowers to the Fiscus family.