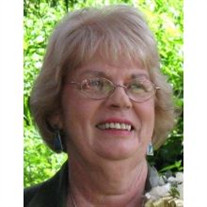 Emma Lou Selker, 80, of Clarion, passed away Wednesday evening, January 18, 2017 of natural causes in Appleton, Wisconsin where she had been residing at Willow Lane Assisted Living for the past 2 ½ years in the same town as her son, Albert. Born June 23, 1936 in Marble, PA, she was the daughter of the late Ambrose S. and Irene C. Groner Niederriter. Emma Lou, an avid learner, graduated from New Port Richie (FL) High School in 1954, St. Vincent’s Hospital School of Nursing with a diploma in Nursing (RN) in 1957, and Penn State University in both 1986 (B.S. Nursing) and again in 1992 (M.S. Health Education). Emma Lou was married on August 23, 1958 to Albert A. Selker Sr. who preceded her in death in 2011. She held positions at Clarion Hospital, director of the diabetic patient education at Dubois Regional Medical Center and Health Care Manager at Clarion University, and then volunteered with the Red Cross. Emma was an avid gardener and loved spending time with her grandchildren. She is survived by three sons, Richard A. Selker of Bridgeville, PA; Philip J. Selker and his wife Bonnie of Ashburn, VA; Albert A. Selker Jr. and his wife Debbie of Appleton, WI; and seven grandchildren: Anna, John and Glenn; Stephanie; and Ted, Luke and Kristin. Emma Lou was preceded in death by her parents; three brothers Robert A., Raymond J., and Victor J. Niederriter: and four sisters, Rose Marie Niederriter, Ruth A. Hartle, Ethel M. Zacheral, and Monica I. Niederriter. Family will receive friends on Saturday, February 18, 2017 from 1 p.m. to 2 p.m. at the Robert V. Burns Funeral Home in Clarion with a Memorial Service immediately following at 2 p.m. Interment will follow in the Immaculate Conception Cemetery. Flowers may be sent to Burns Funeral Home, donations in lieu of flowers may be made to the Red Cross.

Emma Lou Selker, 80, of Clarion, passed away Wednesday evening, January 18, 2017 of natural causes in Appleton, Wisconsin where she had been residing at Willow Lane Assisted Living for the past 2 &#189; years in the same town as her son, Albert. Born... View Obituary & Service Information

The family of Emma L. Selker created this Life Tributes page to make it easy to share your memories.

Send flowers to the Selker family.