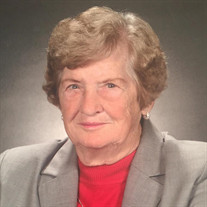 On Monday, January 24, 2022 at 11:45am, Esther “Grace” Corbett passed away after a period of declining health surrounded by her family at her home. Born on August 22, 1927 in Lucinda; Grace was the daughter of the late Walter and Margaret Frohnapfel Lutz. On June 20, 1946 she married Robert Paul Corbett, who preceded her in death on September 23, 1997. Grace worked for Owens-Illinois Glass Plant in Clarion from 1950 until her retirement in 1991. She was a hard worker. A happy day for Grace was a day spent outdoors mowing her yard. Many people commented, "When I'm her age, I want to be like Grace." Grace was a member of the Immaculate Conception Catholic Church in Clarion. She is survived by two sons, Dick Corbett and his wife, Teri, of Rio, WV and Ronald “Burr” Corbett and his wife, Janie, of Clarion; her daughter, Deborah Lauer and husband, Tom “Tike”, of Miola; 7 grandchildren, Nicole (Troy) Renninger, Andy (Dian) Corbett, Kacey (Derek) Wolford, Jami (Ryan) Showalter, Kelley (Nick) Devillo, Luke Lauer (James), and Budd (Poma) Lauer; 10 great grandchildren; Kali Rhine, Morgan Renninger, Kielley and Cole Corbett, Jacob and Sydney Fischer, Emma Devillo, Sophie, Carter, and Madison Lauer; and 3 great-great grandchildren, Gavin, Alyvia, and Sophia Rhine. Grace is also survived by her sister, Ruth Snyder of Snydersburg; along with several nieces and nephews. In addition to her parents and husband, she was preceded in death by her brothers, Bernard, Charles, Carl “Bud”, and Mark, and her sisters, Anastasia, Helen Magness, and Vera “Betty” Wolbert. The Robert V. Burns Funeral Home in Clarion is handling the arrangements. A Mass of Christian Burial will be celebrated at 11 a.m. on Saturday, January 29, 2022 at the Immaculate Conception Catholic Church in Clarion with Rev. Monty Sayers presiding. Interment will take place at the Immaculate Conception Catholic Cemetery at a later date. In lieu of flowers, the family suggests memorials may be made in Grace’s honor to a charity of one’s choice.

The family of Esther G. Corbett created this Life Tributes page to make it easy to share your memories.

Send flowers to the Corbett family.