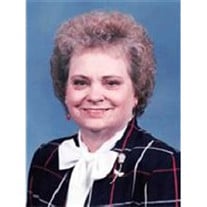 Ethel I. Champion, 85, of route 322, Day City, died Monday, March 22, 2010, at the Golden Living Center in Shippenville. Born July 4, 1924, in Day City, Clarion County, she was the daughter of John A. and Pearl Marie Ambill Leadbetter. Mrs. Champion was married on December 5, 1942 to Joseph A. “Pete” Champion, who preceded her in death on July 12, 1989. She worked for Sylvania in Brookville for several years and retired from C-L School cafeteria. Mrs. Champion was a life long member of the Asbury United Methodist Church where she was very active as Sunday school teacher, treasurer, communion steward, and past member of the choir. She enjoyed cooking, baking, painting ceramics, spending time with her family, and her dog, Tanner. Surviving are two children, Raylene Gourley and husband, Robert, of Clarion; and James A. Champion of Day City; three grandchildren, Tim Champion of Strattanville; Michelle Anthony of Shippenville; and Ashley Spence of Clarion; and two great grandchildren, Christopher Hunt and Jordan Anthony, both of Shippenville. She is also survived by two sisters, Mrs. John Goldie Chittester and Mrs. William Patsy Hileman, both of Day City; three brothers, Lloyd Leadbetter and wife, Patsy, of Kittanning; Wayne Leadbetter and wife, Judy, of Kossuth; and LeRoy Leadbetter, and wife, Jean, of Mayport; and numerous nieces and nephews. In addition to her parents and husband, she was preceded in death by one son, Raymond Champion; three brothers, Raymond Leadbetter, Melvin Leadbetter, and Clarence Leadbetter; and one sister, Clara Luther. Family will receive friends from 2 to 4 p.m. and 7 to 9 p.m. on Thursday, March 25, 2010, at the Robert V. Burns Funeral Home in Clarion and from 10 to 11 a.m. on Friday, March 26, 2010, at the Asbury United Methodist Church in Strattanville. Funeral services will be held at 11 a.m. on Friday, March 26, 2010, at the Asbury United Methodist Church in Strattanville with Rev. Julie Applegate, pastor, presiding. Interment will be held in the Asbury Cemetery in Strattanville. Memorials and donations can be made to the Asbury United Methodist Church,  PO Box 96 Strattanville PA 16258, or Clarion Forest VNA, 305 Main Street PO Box 668 Knox PA 16232.

The family of Ethel I. Champion created this Life Tributes page to make it easy to share your memories.

Send flowers to the Champion family.