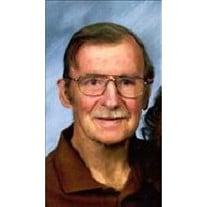 Eugene H. Beers, 78, of Fair Haven Road Strattanville, passed away early Friday morning, January 9, 2009, at the UPMC Northwest in Seneca. Born July 8, 1930 in Franklin, he was son of Eugene F. Bunny Beers who preceded him in death and Margaret Peg Bright Beers, 103, of Clarview in Sligo. Mr. Beers served in the Navy during the Korean War. He was married February 25, 1972 to Delores E Burton, who survives. Mr. Beers worked for the former L & R Decorating in Clarion for 12 years and later retired Owens Illinois Glass Plant after 28 years. He was a member of the Alpa Assembly of God Church in Clarion.  He was also a member of the Clarion Eagles and the Quarter Century Club. Mr. Beers enjoyed watching sports, hunting, fishing, golf, bowling, metal detecting, and spending time with his family. In addition to his mother and wife, he is survived by nine children, Carol Clinger and her husband, Charles, of Limestone; Denise Clinger and her husband, Carson, of Strattanville; Richard McDougle of Helen Furnace; Kathy McDougle of Clarion; Kathy Mitchel and husband, Barry, of Hawthorn; Shirley Allio and husband, Robert, of Clarion; Tammy Munshower of Clarion; Bill Munshower of Arnold; and Deloris Jean Dittman and husband, Evan, of New Bethlehem. Also surviving are three sisters, Georgia Kay Price of Miola; Margaret Williams and her husband, Neal, of Meadville; and Barbara Alba of Florida; nineteen grandchildren, and eleven great grandchildren. In addition to his father, he was preceded in death by two daughters, Marjorie Dithrich and Sherry Deemer. Friends may call from 2 to 4 and 7 to 9 p.m. Sunday at the Robert V. Burns Funeral Home in Clarion. Funeral services will be held at 11 a.m. on Monday, January 12, 2009 in the funeral home with Rev. David Selleck officiating. Interment will be in the Cedarview Memorial Park in Strattanville. Donation can be made to the Cancer Center at Clarion Hospital.

Eugene H. Beers, 78, of Fair Haven Road Strattanville, passed away early Friday morning, January 9, 2009, at the UPMC Northwest in Seneca. Born July 8, 1930 in Franklin, he was son of Eugene F. Bunny Beers who preceded him in death and Margaret... View Obituary & Service Information

The family of Eugene H. Beers created this Life Tributes page to make it easy to share your memories.

Send flowers to the Beers family.