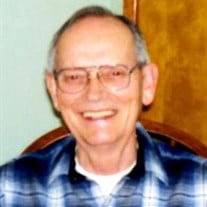 Eugene E. Carroll, 95, of Clarion, passed away Sunday morning, July 22, 2018 at the Clarion Healthcare and Rehabilitation Center in Clarion. He was born on January 27, 1923 in Lucinda; son of the late Augustine E. and Elizabeth M. (Hoover) Carroll. Mr. Carroll was a 1939 graduate of St. Joseph Catholic School in Lucinda and a 1940 graduate of Knox High School. He was a World War II veteran, having served with the 157th Infantry in the European Theatre. He retired from the US Postal Service, Clarion Office, after 33 years of service. He was a member of Immaculate Conception Church in Clarion and a long-time member of American Legion Post 66 of Clarion. Mr. Carroll enjoyed traveling, league bowling and visiting with his family and friends. He was married on Sept. 25, 1964 to the late Margaret "Jean" (Corbett) Carroll who preceded him in death on Aug. 8, 2006. He is survived by his wife's daughters, Patricia Miklic of Clarion and Joanne Reddinger and her husband, Barry, also of Clarion, and several step-grandchildren and step-great-grandchildren. He is also survived by a sister, Veronica (Bonnie) Gatesman and her husband Stephen of Lucinda and numerous nieces and nephews. In addition to his wife and parents, Mr. Carroll was preceded in death by three sisters, Rita (Hugh) Ochs, Marian (Maurice) Hartle and Elizabeth (J. Mark) Ochs; one brother, Thomas (Marjorie) Carroll; and one step-daughter, Judith Elias. The Robert V. Burns Funeral Home in Clarion is handling the arrangements. The family will receive friends beginning at 10 a.m. Tuesday, July 24, 2018 at the Immaculate Conception Catholic Church in Clarion. Mass of Christian Burial will follow at 11 a.m. with Rev. Monty Sayers, pastor presiding. Interment will follow in Cedarview Memorial Park in Strattanville. Mr. Carroll’s family thanks the staff at Clarion Healthcare for their care and devotion while residing there, and Fr. Monty Sayers and Dr. Tim Brooks for this many visits. Memorial donations may be made to Immaculate Conception Church, 720 Liberty Street, Clarion PA, 16214.

Eugene E. Carroll, 95, of Clarion, passed away Sunday morning, July 22, 2018 at the Clarion Healthcare and Rehabilitation Center in Clarion. He was born on January 27, 1923 in Lucinda; son of the late Augustine E. and Elizabeth M. (Hoover) Carroll. Mr.... View Obituary & Service Information

The family of Eugene E. Carroll created this Life Tributes page to make it easy to share your memories.

Send flowers to the Carroll family.