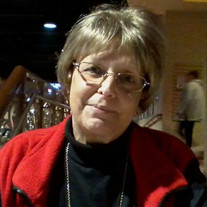 F. Marie Garris, 73, of Clarion, passed away Sunday evening, September 26, 2021 at the Butler Memorial Hospital. She was born on July 28, 1948 in Brookville; daughter of the late Arthur S. And Goldie Plyler Battaglia. Marie married the love of her life, George Garris, Jr., on June 10, 1966, who survives her. She worked at Owens Illinois Glass Plant in Clarion until she retired. Marie was a member of the Single Action Shooter’s Society. She was an avid bingo player and loved camping, working in her yard, and card nights with her sisters. She also loved her dog, Reba, who passed away just ten days before her. Marie is survived by her loving husband, George of 55 years; her son, Bud Garris and his wife, Earleen, of Arizona; her daughter, Melony Kemmer and her significant other, Dan Williams, of Wyoming; five grandsons, Kurtis Garris and his significant other, Melanie, of Dubois, Alan Garris of Arizona, Quinten Garris of Brookville, Codi Kemmer and his significant other, Brittany, of Limestone, and Jessi Kemmer of Wyoming; and six great grandchildren. She is also survived by her brothers, Arthur Battaglia and his wife, Jean, Joseph Battaglia and his wife, Cindy, and Mark Battaglia and his wife, Lisa; her sisters, Georgie Thomas, Chris Phillips and her husband, George, and Mary Park and her husband, Greg; and several nieces and nephews and great nieces and nephews. Marie was preceded in death by her parents; five brothers, Frank, Donald, Michael, Robert, and Greg; and a sister, Judy Ramsey. The Robert V. Burns Funeral Home in Clarion is handling the arrangements. Per Marie’s wishes, there will be no public visitation. A memorial service will be held at a later date. In lieu of flowers, Donations can be sent in Marie’s name to the American Cancer Society online at donate3.cancer.org.

F. Marie Garris, 73, of Clarion, passed away Sunday evening, September 26, 2021 at the Butler Memorial Hospital. She was born on July 28, 1948 in Brookville; daughter of the late Arthur S. And Goldie Plyler Battaglia. Marie married the love... View Obituary & Service Information

The family of F. Marie Garris created this Life Tributes page to make it easy to share your memories.

Send flowers to the Garris family.