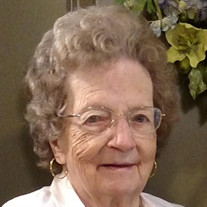 It is with a heavy heart and tears in our eyes that we announce the passing of Frances Louise Wolbert Schmader on Friday, July 20, 2018 at the Clarion Hospital. Louise made her special apartment at Highland Oaks at Water Run home since August 2016. Born September 15, 1926 in Leeper, she was the daughter of Theresa and Conrad Wolbert. Louise, being the “baby of the family”, had eight brothers and five sisters. Her parents and her thirteen siblings preceded Louise in death. In 1947 Louise married the love of her life, the late Donald F. Schmader of Lucinda. For 65 years Louise loved, respected, teased, spoiled, laughed with, cried with, comforted, and treasured Don. She felt she had everything in life when she had Don. Louise was the homemaker and Don provided for their family of six daughters. Louise was a giving, loving woman who enjoyed “her therapy”-stitching, which was one of her greatest joys. She was a master of needlepointing, knitting, sewing, crocheting, etc. Many cherish her handiwork and her creations are treasured in numerous homes. In her earlier years Louise made clothing for the girls. Doll clothes to bridal gowns, Louise kept her sewing machine humming. Although arthritis caused Louise to not be able to do as much, Louise knitted numerous afghans, Christmas tree skirts, and holiday stockings! Jigsaw puzzles also kept Louise thinking and a 1000-piece puzzle was generally in the works of being completed. She also looked forward to solving the Derrick’s daily cryptogram. For years, Louise always responded with “I’m fine!” Her standard response resulted in a pillow with a dead cow and the statement, “Really, I’m fine!” Her great health helped her live a long life! A member of the Immaculate Conception Church, Louise’s faith carried her through the loss of her dear husband of 65 years, Don Schmader who preceded her in death February 12, 2013 and her oldest daughter, Christine Schmader Wells, September 30, 2006. An infant grandson, Kyle Gates, also went to the Lord on November 16, 1982. With her church family, Louise volunteered in many capacities including helping out at the school cafeteria, serving funeral dinners, and decorating the church sanctuary. She enjoyed her weekly Contemplation Group and treasured all who helped her walk up to Communion in her later years. Louise’s life was filled with many airline trips, road trips, and vacations spent with “the girls” and the seventeen grandchildren and fifteen great-grandchildren she loved so much. Louise always smiled more when she was with “the girls”. She loved to hear them laugh and enjoy grand times with their families. Numerous nieces and nephews survive Louise. She especially treasured time playing cards with her oldest sister’s daughters Ruthie Marie Dimerling and Pat Curdo who played cards with her for so many of her later years. Ruthie Marie and Pat traveled every other Tuesday to enjoy lunch, chat, and play cards with her and a dear friend Gerry Weaver. Surviving are her sisters-in-law, Pat McFarland of Shippenville and Lyn Schmader of Jupiter, FL. Five daughters will miss her deeply: Donna Lebda and her husband, Frank, of IL, Diane Rhoads and her husband, Gary, of OH, Deborah Faller and her husband, Gary, of MD, Cindy Gates and her husband, Gerry, of FL, and Susan Jones and her husband, Cahill, of ID. Louise will remain in the hearts of her sixteen grandchildren: Joshua Wells, Jacob Wells, Paulette Lebda Turk, Douglas Lebda, Gabriel Rhoads, Adam Rhoads, Donald Rhoads, Andrea Faller Atlas, Heidi Faller Medford, Tyler Gates, Emily Gates, Carlye Gates, Austin Gates, Dylan Jones, Hannah Jones, and Parker Jones. Fifteen great grandchildren will miss rocking with her: Madelyn and Jackson Wells, Luke and Zoey Lebda, Kevin, Natalie, Samantha, Adelyn, Henry, and Fiona Rhoads, David and Drea Atlas, Hayden and Chase Medford, as well as Cameron Gates. Louise will forever be remembered; may she rest in peace. Since in Louise’s healthier days she loved stitching of all kinds, one of her favorite quotes was “A Stitcher’s Prayer” -Anonymous Lord, grant that I may see to stitch Until my dying day, And when my last short thread is clipped, And scissors tucked away, The work that I have done live on, That other folk may see, The pleasure I have known, Lord, In the skill you gave to me. Louise’s family will receive friends from 1 p.m. to 4 p.m. on Sunday, July 22, 2018 at the Robert V. Burns Funeral Home, 638 Wood Street, Clarion, with a Christian Wake Service to be held at 3:30 p.m. Mass of Christian Burial will be celebrated at 11 a.m. on Monday, July 23, 2018 at the Immaculate Conception Catholic Church in Clarion with Rev. Monty Sayers, pastor presiding. Louise’s hands were always busy which modeled for her children and grandchildren that there is always work to be accomplished in the name of the Lord. Louise’s family is grateful for their friends and neighbors for their ongoing support and compassion. Thanks to the wonderful staff at Water Run who visited with Mom and engaged in conversation. A chance to connect with others and talk was always treasured by Mom. In lieu of flowers, donations may be made to Charitable Deeds of Knox or the charity of your choice.

It is with a heavy heart and tears in our eyes that we announce the passing of Frances Louise Wolbert Schmader on Friday, July 20, 2018 at the Clarion Hospital. Louise made her special apartment at Highland Oaks at Water Run home since August... View Obituary & Service Information

The family of F. Louise Schmader created this Life Tributes page to make it easy to share your memories.

It is with a heavy heart and tears in our eyes that we announce...

Send flowers to the Schmader family.