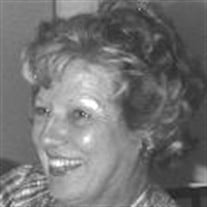 Forest Cook was born on November 1, 1922, in Brookville, Pennsylvania, to Ruth Caroline Evangeline Baker, age 23, and Thomas Burnside Cook Jr., age 25, of Cooksburg, Cook Forest State Park, PA. She grew up there with a little dog named Poodle, once had a pet opossum, and helped to raise five baby red foxes. After attending Case Western Reserve and Cleveland School of Art, Forest Cook married Robert Daniel Culbertson in Clarion, Pennsylvania on July 24, 1943. They celebrated 66 years of marriage before his passing in 2010. She is survived by her three children: Robert Daniel Culbertson Jr. (Robin, and granddaughter Cadence, of California), Edward Thomas Culbertson (Kelly of Cooksburg, PA, and Katy Ingrande of St. Petersburg, FL, with husband Nicholas and son Everett), and Susan Louise Culbertson of St. Petersburg, FL. Forest lamented that she hadn't traveled more – but she, with Bob during WWII and later with family, made it to most of the 50 states. They made a two-week, slow-speed motorhome trek across beautiful Alaska, and enjoyed many continental adventures in a Ford van with regrettably bold upholstery and duct-tape accents. Forest loved first-floor hotel rooms, Yellowstone in winter, and some Sanka with her bear claws. She took joy in beautiful sunsets, full moons, and starry, starry nights. She loved to loathe, delighted in cardboard, and once tried to blackmail the literal Easter bunny. Forest was a wife, a mother, a grandmother, and a pilot with a weathered eye for weather. She was a rather good artist and architect. She will be remembered fondly for her fashion sense and her incomprehensible but eco-conscious filing system. The Robert V. Burns Funeral Home in Clarion is handling the arrangements. There will be no public visitation. A Memorial Service will be held at a later date. Interment will be held in the Cook Forest Cemetery.

The family of Forest C. Culbertson created this Life Tributes page to make it easy to share your memories.

Send flowers to the Culbertson family.