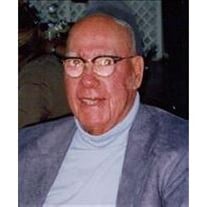 Frank Schaeffer Jr., 92, of Country Springs, Sligo, formerly of Wilson Avenue, Clarion, died at 5:30 p.m. Monday, April 27, 2009 at the Clarview Nursing Home in Sligo.   Born September 10, 1916, in Parker, he was the son of Frank Schaeffer Sr. and Nellie Cratty Schaeffer. Mr. Schaeffer was married October 27, 1939 to the former Irene Stark, who preceded him in death on June 3, 2008.   He was a veteran of WWII. His bomb squadron dropped the first A bomb on Japan.   Mr. Schaeffer was a welder for Owen-Illinois Glass Plant.   He was a member of the Immaculate Conception Church in Clarion.   Mr. Schaeffer enjoyed hunting, fishing, and boating on the river in his younger days. He then enjoyed golfing after his retirement.   He is survived by a nephew, Henry V. Schaeffer and wife, Nancy, of Sligo; a great nephew, Michael Schaeffer of Sligo; three great nieces, Debbie Kennedy of South Carolina; Sherry Laughlin of Sligo; and Judy Kifer of Curllsville; a brother, Andy Schaeffer of Erie; and two sister-in-laws, Margret Smith of Warren; and Martha Schaeffer of Oil City.   He is also survived by a number of nieces, nephews, great-nieces, and great-nephews.   In addition to his wife and parents, he was preceded in death by two brothers, Walt and Link Schaeffer; and one sister, Helen Drum.   Family will receive friends from 3 to 6 p.m. on Wednesday, April 29, 2009 at the Robert V. Burns Funeral Home in Clarion.   Mass of Christian Burial will be celebrated at 11 a.m. Thursday, April 30, 2009 in the Immaculate Conception Catholic Church in Clarion with Rev. Monty Sayers, pastor of the Immaculate Conception Church in Clarion, officiating.   Following the service, military honors will be held at the Immaculate Conception Cemetery accorded by the American Legion Post #66 of Clarion.   Entombment will follow in the Immaculate Conception Cemetery Mausoleum.

The family of Frank Schaeffer Jr. created this Life Tributes page to make it easy to share your memories.

Send flowers to the Jr. family.