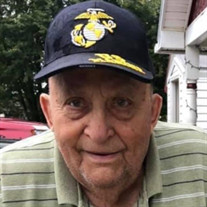 Frank J. Ragley, 87, of Shippenville, passed away on Tuesday, November 16, 2021 at the Clarion Hospital following a brief illness. He was born on September 27, 1934 in Punxsutawney; son of the late Sam and Mary Ager Ragley. Frank attended the Immaculate Conception Catholic Schools, graduating in 1953. In August of 1953, he enlisted in the USMC, serving proudly for the next three years. On June 27, 1959, Frank married the love of his life, Patricia Smathers, on June 27, 1959 at the Immaculate Conception Catholic Church. She survives him. Starting in the fall of 1959, he went to work for the United States Postal Service in Clarion. In 1975, Frank and Pat moved their family to Vero Beach, FL, where Frank had accepted a job as a carrier at the Vero Beach Post Office. Eventually, they moved back to Clarion, but continued to spend their winters in Florida to be near their family Frank was a member of the Immaculate Conception Catholic Church of Clarion. He was also a member of the American Legion Post #066 of Clarion. Frank was an avid Pittsburgh sports fan. He enjoyed going to Debs for breakfast, doing yard work, being outdoors, and spending time with his family. He also was a PIAA Official and refereed for high school and college basketball. Frank leaves behind his wife, Pat of 62 years; two sons, John Ragley of Cape Canaveral, FL and David Ragley and his wife, Elaine, of Vero Beach, FL; his daughter, Margaret Ragley of Orlando, FL; and his two grandchildren who were his pride and joy, Olivia and Landon Ragley, both of Vero Beach, FL. In addition to his parents, Frank was preceded in death by his two brothers, Tom and David Ragley; his in-laws, Neil and Lucille Smathers; and a brother-in-law, Tom Smathers. The Robert V. Burns Funeral Home in Clarion is handling the arrangements. At Frank’s request, there will be no services. In lieu of flowers, the family suggests donations be made in Frank’s honor to the Saint Jude Children’s Hospital online at www.stjude.org.

Frank J. Ragley, 87, of Shippenville, passed away on Tuesday, November 16, 2021 at the Clarion Hospital following a brief illness. He was born on September 27, 1934 in Punxsutawney; son of the late Sam and Mary Ager Ragley. Frank attended the... View Obituary & Service Information

The family of Frank J. Ragley created this Life Tributes page to make it easy to share your memories.

Frank J. Ragley, 87, of Shippenville, passed away on Tuesday,...

Send flowers to the Ragley family.