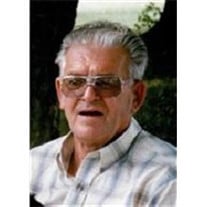 Fred L. McCleary, 88, of Miola Road, Clarion, died Saturday, December 10, 2011, at the Jefferson Manor in Brookville. Born March 22, 1923, in Miola; he was the son of the late Edgar and Willard McLaine McCleary. A veteran, Mr. McCleary served in the Air Force during WWII.  During 1942 to 1946, he was a mechanic on the Memphis Belle. He was married on October 12, 1942 to the former Edna R. Dolby, she survives. Mr. McCleary enjoyed boating, hunting, playing cards, working, and gardening.  He loved is dogs, J.D. and Rascal. In addition to his wife, he is survived by three children, Fred F. McCleary and his wife, Diane, of Etters; John E. McCleary and his wife, Terri, of Marion, NC; and Deborah M. Clinger of Corsica; a son-in-law, John E. Wright of Miola; twelve grandchildren and numerous great grandchildren. Also surviving are three sisters, Betty Milanovich of Rimersburg, Doris Mahle of Rhode Island, and Mary Carolyn Deitz of Miola; and a sister-in-law, Arlene McCleary of Brookville. He was preceded in death by his parents, a daughter, Diane E. Wright, a son-in-law, George F. Clinger, two brothers, Thomas and Charles McCleary, a sister, Katherine Beck, and an infant grandson. Family will receive friends from 2 to 4 p.m. and 6 to 8 p.m. on Tuesday, December 13, 2011, at the Robert V. Burns Funeral Home, 638 Wood Street, Clarion. Military honors will be accorded by American Legion Post #66 at 10:45 a.m. in the funeral home. Funeral services will be held at 11 a.m. on Wednesday, December 14, 2011, in the funeral home with Rev. Randy Evans, Clarion-Forest VNA Chaplain, officiating. Interment will be held in the Miola Cemetery in Clarion.

The family of Fred L. McCleary created this Life Tributes page to make it easy to share your memories.

Send flowers to the McCleary family.