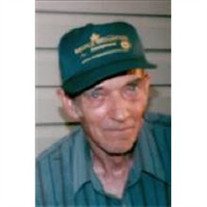 Fred A. Reichard, 71, of Mayport RD 2, Armstrong County, died at 10 a.m. Saturday, April 25, 2009, in the Hospice House in Shippenville. Born Dec. 11, 1937, in Mayport, he was a son of Spurgeon and Nellie Kramer Reichard.   Mr. Reichard worked as an appliance repairman.   He enjoyed hunting, doing yard work and the outdoors. He loved his cats.   He was married May 16, 1963, to the former Florence M. Sloan, who preceded him in death Nov. 16, 2005.   Surviving are two sons, Scott A. Reichard and his wife, Marie, of Walstonburg, N.C., and Chris M. Reichard and his wife, Sara, of Shippenville; two daughters, Tina M. Troup of Brookville and Sandra L. Reichard of Princeton, N.C.; 11 grandchildren and two great-grandchildren.   Survivors also include two sisters, Shirley Stewart and her husband, Ted, of West Palm Beach, Fla., and June Reddinger of Florida; and one brother, James Reichard and his wife, Gloria, of West Palm Beach, Fla.   In addition to his parents and wife, he was preceded in death by two brothers, Bud and Gary Reichard; and two sisters, Betty Kunselman and Thelma Bish.   Friends will be received from 7 to 9 p.m. today at the Robert V. Burns Funeral Home of Clarion.   Funeral services will be held at 11 a.m. Tuesday in the United Methodist Church of Shippenville with the Rev. Betsy Stanton Cooper, church pastor, officiating.   Interment will be in Immaculate Conception Cemetery.

The family of Fred A. Reichard created this Life Tributes page to make it easy to share your memories.

Send flowers to the Reichard family.