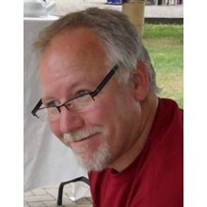 Frederick K. Clark, of Brookville, passed away on Thursday, April 13, 2017 at Clarion Hospital after a long battle with cancer. At age 55, he died a warrior. He was born on December 5, 1961 in Hinckley, Ohio; the son of the late Larry Clark and Janet Hale Clark Hoover of Ohio. In 1988, he married Margaret Schmader Clark, and together they have 3 children, Cathlin, age 24; Caleb, age 22; and Clare, age 20. A unique soul, Fred had a great sense of humor and enjoyed spending time with family and friends, drawing and painting, hunting, camping with family at the Allegheny River, deep sea fishing, golfing, and spending time in his pottery studio. Fred graduated from Brookville Area High School in 1983, and after 20 years laying carpet for Colony Homes in Shippenville, he went back to Clarion University and graduated with a Bachelor of Fine Arts degree in 2009. Since then, his work has had a significant impact on the surrounding community. His art has been featured at the Winkler Gallery in Dubois, and the Liddle Gallery in Clearfield. He won several ‘first place’ and ‘best in show’ awards from the art shows at the Brookville Laurel Festival and the Clarion Autumn Leaf Festival. Fred was involved in projects at CREATE Brookville’s Art in the Park and Soup and Soul events, as well as created earthen benches and ovens at Quiet Creek Herb Farm in Brookville. Even before his artistic pursuits, Fred was a dedicated community servant. For his parish of Immaculate Conception in Clarion, Pa., he served as a Eucharistic Minister, a Knight of Columbus, and taught first grade religious education classes for over 10 years. He will be greatly missed by all who knew his steadying presence and contagious laughter. Fred is survived by his wife, children, his mother, two sisters, Denise and Joyce, and his mother-in-law, Kathleen Schmader of Sigel. He is preceded in death by his father and father-in-law, Joseph Schmader. The Robert V. Burns Funeral Home in Clarion is handling the arrangements. Family will receive friends from 9 a.m. to 10 a.m. on Monday, April 17, 2017 at the Immaculate Conception Catholic Church with a Mass of Christian Burial to follow at 10 a.m. with Rev. Monty Sayers, pastor presiding. In lieu of flowers, memorial donations may be made in Fred’s name to the Sarcoma Foundation of America at curesarcoma.org.

Frederick K. Clark, of Brookville, passed away on Thursday, April 13, 2017 at Clarion Hospital after a long battle with cancer. At age 55, he died a warrior. He was born on December 5, 1961 in Hinckley, Ohio; the son of the late Larry... View Obituary & Service Information

The family of Frederick K. Clark created this Life Tributes page to make it easy to share your memories.

Frederick K. Clark, of Brookville, passed away on Thursday, April...

Send flowers to the Clark family.