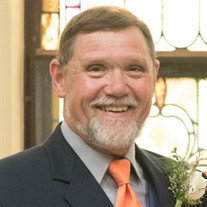 Frederick W. Foster, 69, of Clarion, passed away unexpectedly early Tuesday morning, June 8, 2021 at the UPMC Hamot Hospital in Erie following a brief illness. He was born on January 21, 1952 in Butler; son of the late James R. and Viola Mae Garris Foster. Fred graduated from East Brady High School in 1969. He married the love of his life, Jeanne Deitz, on October 25, 1986, who survives. Fred was a CDL Class A Instructor with Jeff Tech at Barber Trucking and also worked for Barber. He also worked for PennDOT for 32 years, Motor Carrier Enforcement for 3 years, and numerous other trucking companies. Fred was a member of the First Presbyterian Church in Clarion. He was also a member of the Masonic Lodge #277 of Clarion, where he was past master, the Clarion County Shrine, Syria Shrine, Coudersport Consistory, and the Local #2112 AFSCME. Fred was a Cub Scout Pack Leader and Charter Organization Representative, and a lifetime member of the NRA. He enjoyed riding his Harley, fishing, hunting, guns, gardening, tinkering around his garage, socializing, and spending time with his family, especially his grandson, Haydin. He is survived by his loving wife, Jeanne of 34 years; his son, James R. Foster of Clarion; his daughter, Bridgette Thompson and her husband, Brian, of Corsica; a grandson, Haydin Foster; with a granddaughter, Brexleigh, on the way. Fred is also survived by his brother, Kenneth Foster of Chicora; his sister, Martha Craig and her husband, Doyle, of Tennessee; and numerous nieces and nephews. He was preceded in death by his parents; two brothers, James R. Foster and William C. Foster; and his parents-in-law, Don and Edith Deitz. The family will receive friends from 2 p.m. to 4 p.m. and 6 p.m. to 8 p.m. on Thursday, June 10, 2021 and from 5 p.m. to 9 p.m. on Friday, June 11, 2021 at the Robert V. Burns Funeral Home in Clarion. A Masonic Service will be held in funeral home at 7 p.m. on Friday. Funeral services will be held at 11 a.m. on Saturday, June 12, 2021 in the funeral home with Rev. Harold O. Jacobson, pastor of the Grace Lutheran Church in Clarion. Interment will follow in the Sherrett Cemetery. In lieu of flowers, donations can be made to a charity of one’s choice.

Frederick W. Foster, 69, of Clarion, passed away unexpectedly early Tuesday morning, June 8, 2021 at the UPMC Hamot Hospital in Erie following a brief illness. He was born on January 21, 1952 in Butler; son of the late James R. and Viola Mae... View Obituary & Service Information

The family of Frederick W. Foster created this Life Tributes page to make it easy to share your memories.

Send flowers to the Foster family.