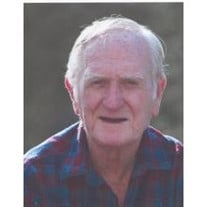 Frederick “Skin” Montgomery, 92, of Sligo, passed away on Sunday July 9, 2017 at Laurel Brook Landing in Brookville. He was born on September 15, 1924 in Rimersburg, the son of the late Charles and Winifred Mortimer Montgomery. Fred was married on October 02, 1946 to Betty Shirey who preceded him in death on December 28, 2010, Skin was a dragline operator for Tri -County Fuel, Manor Coal Company and retired from C&K Coal Company. He was a corporal in the Army serving during WWII. He was of the Methodist faith. Skin was a founding and Life member of the Rimersburg VFW #7132. He enjoyed hunting, fishing, and coon hunting and running beagles. Skin was well known as being the Curllsville Tater King. He was also well known for lending a hand to any neighbor in need. Fred is survived by three children; Bonnie Hubauer and husband Joe of Monongahela, Frederick C. Montgomery and wife Hallie of Ford City and Barb Conner of Sligo; a daughter-in-law, Esther Montgomery of Sligo; 12 grandchildren; Jeffery Hubauer and wife Kimber, Denise Huntoon, Donna Priester and husband Todd, Debbi Priester and husband Chris, Donald Montgomery Jr. and wife Ann, Deanna Montgomery, Benjamin, Zachary & Caitlyn Montgomery, Trista Minick and husband Tom, Betsy Saylor and husband Brent and Andrew Smith and wife Kristen ; 24 Great grandchildren and 4 Great- great grandchildren He is also survived by his siblings; Bernice Conner and Jack Montgomery and wife Dorothy all of Rimersburg; several nieces and nephews. Fred was preceded in death by his parents, wife, twin sons Donald Montgomery Sr. and an infant; brothers, Floyd and Donald Montgomery, a son-in-law, Robert Conner and a grandson, Jerry Hubauer. Family will receive friends from 2 to 4p.m. and 6 to 8p.m. on Tuesday, July 11, 2017 at the Burns Funeral Home and Crematorium, Inc. 434 Main Street, Rimersburg. Funeral services will be held at 11 a.m. in the funeral home on Wednesday, July 12, 2017 with the Rev. Stephanie Weaver, pastor of Sligo Presbyterian Church presiding. Interment will follow in the Rimersburg Cemetery where Military Honors will be accorded by the American Legion Honor Guard Post #0454 and the VFW Post #7132 of Rimersburg. Donations or memorials can be sent to the Laurelbrooke Landing, Harmony Circle Unit, 133 Laurelbrooke Drive, Brookville, PA 15825.

Frederick &#8220;Skin&#8221; Montgomery, 92, of Sligo, passed away on Sunday July 9, 2017 at Laurel Brook Landing in Brookville. He was born on September 15, 1924 in Rimersburg, the son of the late Charles and Winifred Mortimer Montgomery. Fred... View Obituary & Service Information

The family of Frederick E. Montgomery created this Life Tributes page to make it easy to share your memories.

Frederick “Skin” Montgomery, 92, of Sligo, passed away on Sunday...

Send flowers to the Montgomery family.