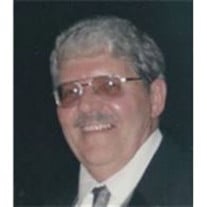 Fredrick Wayne Heasley, age 79, of Strattanville, passed away Friday, January 20, 2012, at the DuBois Regional Medical Center.  He was born on January 2, 1933, in Clarion; he was the son of Samuel J. and Clara S. Frill Heasley.  He leaves to cherish his memory, his wife of 57 years, Linda L. (Seigworth) Heasley.  They were married on November 27, 1954.  Mr. Heasley was a graduate of CL High School Class of 1951.  Fred was very proud of his children.  He was an avid hunter, craftsman, and Steelers fan.  He was a lifelong member of the Asbury United Methodist Church in Strattanville, where he was a trustee.  Mr. Heasley was a 50 year member of Clarion Lodge #277 F. & A.M. and the New Castle Consistory.  He served our country on the front lines in Korean War, with the 25th Infantry Division of the U.S. Army, from 1951 to 1953.  He was a member of the Strattanville American Legion Post #249.  He retired in 1994 from Owens-Illinois Glass Plant in Clarion after working for 42 years.  He was a moldmaker. In addition to his wife, Mr. Heasley is survived by two sons, Cameron Heasley and his wife, Deborah, of Mississauga, Ontario, and Brian Heasley and his wife, Sue, of Strattanville, and one daughter, Deanna Heasley and her husband, Sean Su, of Erie; five grandchildren, Jason Heasley and his wife, Lara, of Portland, OR, Jessica Holton and her husband, Sean, of Kingsport, TN, Douglas Heasley of Strattanville, and Lienne and Elanna Su of Erie.  He had three great-grandsons, Cade and Brandt Holton, and Nathaniel Heasley. Mr. Heasley is also survived by his sister, Doris Miller, of Muncie, IN; stepmother, Clara Heasley of Sligo; sisters-in-law, Marian Heasley, Donna Heasley, Arlene Heasley, Patricia Rhoads, Marilyn Fox, Brenda Seigworth, Maureen Seigworth, Mary Lou Seigworth; and his brother-in-law and sister-in-law, Tom and Ella May Seigworth. He was preceded in death by his parents; a granddaughter, Jennifer Heasley; brothers, Richard, Daniel, and Donald (all of whom served with him during the Koran War period); his twin sister, Phyllis Daugherty; and brothers-in-law, Ron, Lloyd, Bill, and Fred Seigworth, and Eugene Daugherty. Family will receive friends from 2 to 4 p.m. and 7 to 9 p.m. on Tuesday, January 24, 2012, at the Robert V. Burns Funeral Home, 638 Wood Street, Clarion. Masonic members will meet at 7 p.m. on Tuesday, January 24, 2012, in the funeral home to pay their respects. Military honors will be accorded by American Legion Post #66 of Clarion at 10:45 a.m. on Wednesday, January 25, 2012, at the Asbury United Methodist Church in Strattanville. Funeral services will be held at 11 a.m. on Wednesday, January 25, 2012, in the Asbury United Methodist Church in Strattanville with Rev. Julie Applegate, pastor of the Asbury United Methodist Church, and Rev. Kurt Knobel co-officiating. Interment will be held in the Asbury Cemetery. Memorials and donations can be made to the Asbury United Methodist Church, PO Box 96, Strattanville PA 16258.

The family of Fredrick W. Heasley created this Life Tributes page to make it easy to share your memories.

Send flowers to the Heasley family.