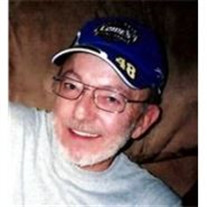 Garry Lee Myers Sr., 67, of Rimersburg, passed away unexpectedly on Monday, February 2, 2015, at the Clarion Hospital. Born on November 30, 1947 in Knox; he was the son of Robert and Ruby Eisenhuth Myers. Garry was married on May 19, 1995... View Obituary & Service Information

The family of Garry L. Myers Sr. created this Life Tributes page to make it easy to share your memories.

Send flowers to the Sr. family.