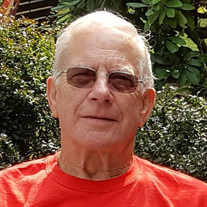 Gary M. Cyphert, 77, of Limestone, passed away Sunday, June 10, 2018 at home. He was born on January 8, 1941 in Leeper, the son of the late Edward and Gwendolyn Sherman Cyphert. Gary graduated from North Clarion High School in 1958. He was married to Shirley Edder on November 26, 1960. Gary worked at Seidle’s Chevrolet, Glacier Minerals and later, retired from Skibeck Pipeline Company. He was also a former Limestone Twp. Supervisor. He was a member of the New Rehobeth Greenville Presbyterian Church, where he held the positions as Elder, Trustee and custodian. He was a life member of the Limestone Twp. Vol. Fire Dept., the Masonic Lodge #277, the Moose, Eagles and American Legion all of Clarion, Knight Cruisers local car club and the GoodGuys Rod and Custom Association. Gary enjoyed old cars, especially his 1941 Chevy street rod that he restored, as well as attending his grandchildren’s school events. He is survived by his wife, one son, Michael Cyphert and wife Teresa of Limestone; two grandsons, Kyle Cyphert of Erie and Nicholas Cyphert of Limestone; five brothers, Don Cyphert and wife Marie of Tylersburg, John Cyphert and wife Betty of Lake Lucy, Dave Cyphert and wife Bonnie of Shippenville, Tom Cyphert of Treasure Lake and Ron Cyphert and wife Georgean of Hawthorn; a sister, Joan (Hope) Lander of Shippenville and a sister in law, Carole Cyphert of Miola and a numerous nieces and nephews. He was preceded in death by his parents, a daughter, Denise Cyphert, five brothers, Howard (Huck) Klepfer, James Klepfer, Edward (Jack) Cyphert, Kenneth Cyphert and Harold Cyphert; two sisters, LaRue McLaine and Jule Lander. Family will receive friends from 2pm to 4pm and 6pm to 8pm Wednesday, June 13, 2018 at the Robert V. Burns Funeral Home in Clarion. Family will also receive friends from 10am to 11am Thursday, June 14, 2018 at the New Rehobeth Greenville Presbyterian Church with funeral services beginning at 11am with the Rev. Collen McFarland and the Rev. James Dietrich presiding. Interment will follow in the Ceaderview Memorial Park.

Gary M. Cyphert, 77, of Limestone, passed away Sunday, June 10, 2018 at home. He was born on January 8, 1941 in Leeper, the son of the late Edward and Gwendolyn Sherman Cyphert. Gary graduated from North Clarion High School in 1958. He was... View Obituary & Service Information

The family of Gary M. Cyphert created this Life Tributes page to make it easy to share your memories.

Send flowers to the Cyphert family.