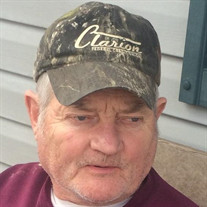 Gary J. McAdoo, 73, of Clarion, passed away early Friday morning, November 10, 2017 at his home unexpectedly of natural causes. He was born on June 10, 1944 in Brookville; son of the late Harold Joseph and Mary Evelyn Cowan McAdoo. Gary graduated in 1963 from Clarion Area High School. He married Marge Ace on August 26, 1965, and she survives. Gary worked for thirty-nine years at the Owen’s Illinois Glass Plant in Clarion, retiring in 2002. He was a member of the First United Methodist Church in Clarion. Gary was also a member of the Eagles Club #3807 and Moose Lodge #101 both of Clarion. He enjoyed walking in the woods and picking mushrooms. Gary was known as the nature enthusiast. He also enjoyed hunting, fishing at Lake Erie, and riding his gator with his grand dog, Patches. Gary is survived by his loving wife, four sons, Joe McAdoo and his wife Charmaine of Calabash, NC, Garett McAdoo and his wife MaryAnn of Toms River, NJ , Brad McAdoo and his wife Lisa of Limestone, and Dan McAdoo and his wife Erin of Cleveland, OH, eight grandchildren, Josh McAdoo and his wife Lynnsey of Shippenville, Amber Hathorn and her husband Jeff of Saint Marys, Heather McAdoo and her friend Jordan of Limestone, Nicole McAdoo of Limestone, Breanna Robinson and her husband Ethan of Texas, Devon McAdoo and his friend Brittney of NC, Brandon McAdoo of Mercer, and Garett McAdoo of NJ, three great granddaughters, Molly, Karley, and Scarlett, and his goat, Butterball. He is also survived by a sister, Norma Rankin and her husband John of TX and a number of nieces, nephews. He was preceded in death by his parents. Family will receive friends from 1 p.m. to 5 p.m. on Sunday, November 12, 2017 at the Robert V. Burns Funeral Home in Clarion. Funeral Services will be held at 11 a.m. on Monday, November 13, 2017 in the Funeral Home with Rev. Scott Mapes, relative of the family. Interment will follow in the Limestone Cemetery. Memorials and donations can be sent in Gary’s name to the Limestone Fire Department, 9790 PA-66, Clarion, PA 16214.

The family of Gary J. McAdoo created this Life Tributes page to make it easy to share your memories.

Send flowers to the McAdoo family.