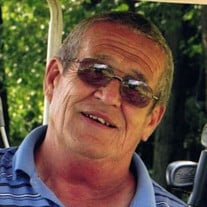 Gary D. “Tub” Neal, 80, of Clarion, passed away Tuesday evening, April 12, 2022 at the UPMC Shadyside Hospital in Pittsburgh. He was born on February 28, 1942 in Clarion Township; a son of the late Robert and Hazel Wensel Neal. Tub married the former Sara Neal on July 11, 1970, who survives him. He worked for the Laborers Local 952 in Kittanning as a construction laborer, working on buildings and highways. Tub served in the US Army from 1964 to 1966, stationed in Germany. He enjoyed going to casinos and watching NASCAR. Tub loved gardening and enjoyed giving the things he proudly grew to his family and friends. But most of all, he enjoyed his daily trips around town to check things out and visiting all his cronies. Tub is survived by his loving wife, Sara of 51 years, and two brothers, Dick Neal and Terry Neal, both of Ohio; along with numerous nieces and nephews. In addition to his parents, he was preceded in death by his siblings, Audene Kent, Clair “Mike” Neal, Elma Hetrick, Max Neal, Shirley Crosson, Joanne Judy, Ronald “Boop” Neal, Pat Fuller, Marilyn Crews, Wendell “Butch” Neal, and Sue Amato. Family and friends will be received from 12 p.m. to 2 p.m. on Friday, April 15, 2022 at the Robert V. Burns Funeral Home in Clarion where funeral services will follow at 2 p.m. with Rev. Harold Jacobson, pastor of the Grace Lutheran Church in Clarion. Interment will follow in the Cedarview Memorial Park in Strattanville.

The family of Gary D. Neal created this Life Tributes page to make it easy to share your memories.

Send flowers to the Neal family.