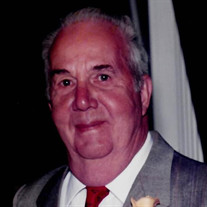 George H. Collett, 93, of Clarion, passed away Tuesday afternoon, August 27, 2019 at his home. He was born on July 10, 1926 in Limestone; son of the late Jay L. and Ada I. Carberry Collett. George was a 1944 graduate of Clarion-Limestone High School. He was a WWII veteran, serving a few kilometers from his older brother, Jack, who was killed in action on March 15, 1945. George married Jane McMillen on July 12, 1952 in Clarion; whom preceded him in death on April 18, 2019. He operated the Penn DOT weigh station on Route 80 prior to his retirement. George was a life member of the American Legion Post 66 in Clarion, serving in various executive positions. He is survived by a son: Michael G. Collett and his wife Catherine of New Kensington and a daughter: Kathryn J. Morrison and her husband John of Shippenville; three grandchildren: Amanda Beckner and her husband Jeff of Fairfax Station, Virginia, Dr. Megan Collett of New Kensington, and David Collett of New Bethlehem; and five great grandchildren: Charles, Claire, Lucia, Francesca, and Ruby. George is also survived by his three sisters: Doris Hays of Clarion, Bonnie Hoover of New Bethlehem, and Margaret “Peg” Emrick of Elk City; along with several nieces and nephews. In addition to his parents and wife, George was preceded in death by his son: James D. Collett; sister: Lois Smith; and brothers: Robert Collett, Sr., Victor Collett, and Staff Sergeant Jack Collett. The family will receive friends on Saturday, August 31, 2019 from 1 p.m. to 2:30 p.m. at the Robert V. Burns Funeral Home in Clarion. Military honors will be accorded by the American Legion Post #66 in the funeral home at 2:30 p.m., with a blessing service to follow. Interment will be held in the Immaculate Conception Catholic Cemetery. In lieu of flowers, the family suggests donations in George’s name to the charity of your choice.

George H. Collett, 93, of Clarion, passed away Tuesday afternoon, August 27, 2019 at his home. He was born on July 10, 1926 in Limestone; son of the late Jay L. and Ada I. Carberry Collett. George was a 1944 graduate of Clarion-Limestone High... View Obituary & Service Information

The family of George H. Collett created this Life Tributes page to make it easy to share your memories.

Send flowers to the Collett family.