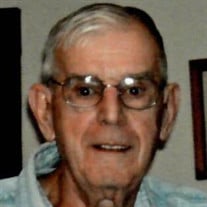 George E. Niederriter, 82, of Limestone, went home on Saturday, September 23, 2017 at the Clarion Hospital. He was born on November 6, 1934 in Marble, PA; son of the late Amos and Margaret Zagst Niederriter. They moved to the Limestone area in 1936 after the death of his father. George served in the United States Navy from 1953 to 1957, After an honorable discharge, he was employed by Cleveland Crane, Hawk Brothers Coal Company, Maxwell Plumbing & Heating, and retired in 1991 after 26 years at Clarion University as a foreman. George was a member of the American Legion, Knights of Columbus, William Penn Associates, the Lions Club, the AFSCMEL Chapter 13 of the retired public employees of PA, and the Limestone Volunteer Fire Department. He was married to Barbara Miller on June 10, 1957 for 60 wonderful years, and she survives. George is survived by his wife, four daughters, Peggy Lander and her husband Gene “Puffy” of Lucinda, Connie Dausch of Lucinda, Kathy Deitz and her husband Randy of Mayport, and Diane Justice and her husband Keith of Strattanville, his grandchildren, Erica Griffith and Allen Resignello, Colleen Griffith, Kara and Steve Drayer, Seth and Aundra Justice, and Ethan Justice, his step grandchildren, Brandan, Zac, and Tasha Deitz, Gehran, Zach, and his wife Diana, and Laura Dausch, and his great grandchildren, Maddy and Bobby Drayer, Everleigh Haibach, Gracilyn Rhoades, Hayden Justice, Dudley Eshbaugh, and Mila Dausch. George was preceded in death by his parents, two siblings, many aunts, uncles, and cousins, his in-laws, Chester and Martha Reinsel Miller, five brothers-in-law, four sisters-in-law, and one son-in-law, Gene Dausch. Family will receive friends from 2 p.m. to 4 p.m. and 7 p.m. to 9 p.m. on Tuesday, September 26, 2017 at the Robert V. Burns Funeral Home in Clarion. Funeral Services will be held at the Saint Nicholas Catholic Church in Crates on Wednesday, September 27, 2017 at 11 a.m. with the Rev. Samuel Bungo, pastor presiding. Being a good role model, he taught his girls to be independent and have good work ethics. He also taught his sons-in-law to do plumbing and home repairs, and his grandchildren to be prepared for their future. Memorials or Donations can be made in George’s name to the Clarion Forest VNA, 271 Perkins Road, Clarion, PA 16214 or to the Limestone Fire Hall, 9790 PA-66, Clarion, PA 16214.

George E. Niederriter, 82, of Limestone, went home on Saturday, September 23, 2017 at the Clarion Hospital. He was born on November 6, 1934 in Marble, PA; son of the late Amos and Margaret Zagst Niederriter. They moved to the Limestone area... View Obituary & Service Information

The family of George E. Niederriter created this Life Tributes page to make it easy to share your memories.

Send flowers to the Niederriter family.