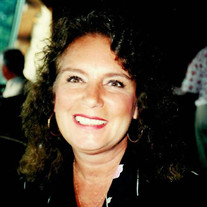 Georgia Ann Simpson, 66, of Sligo, passed away peacefully at her home surrounded by her family Saturday evening, January 18, 2020, after a yearlong battle with lung cancer. She was born on March 2nd, 1953 at the Oil City Hospital; daughter of the late Russell and Gertrude Kaweski Gustafson. Georgia grew up on Warren Street, affectionately known as “Polish Hill”. She attended Assumption of the Blessed Virgin Mary Catholic School through the eighth grade and graduated from Oil City High School in 1971. While on a double date with another “Clarion boy”, Georgia met the outgoing and handsome Robert Simpson from Sligo. The two were smitten with each other and he asked her out the very next day. Bob and Georgia have been together ever since that very first date. They were married on Valentine’s Day, February 14th, 1972 at Saint Joseph’s Catholic Church. Bob and Georgia moved to Pennsy Road in Sligo, where they built their home and raised their children Jamie, Bobbie, and Jeremy. Georgia was a stay at home mom until her kids were old enough to go to school. She worked at Fashion Bug and WDI Office Supply. For many years until her retirement, she worked as a case manager at the Clarion County Assistance Office. Georgia worked tirelessly helping many people in Clarion during their most difficult time. In retirement, what Georgia enjoyed most was spending time on her back deck getting a suntan and listening to music or relaxing in her hot tub. She loved cooking family dinners around the holidays. On many Sunday mornings you would find her drinking coffee and listening to Polka music. “Grammy” was at her best when all of her kids and grandkids were at home. She was proud of her children and loved and spoiled her grandchildren to no end. She is survived by her loving husband: Bob, of 47 years; three children: Jamie Simpson and his wife, Jennifer, of Clarion, Bobbie Freeman and her husband, Kyle, and Jeremy Simpson and his wife, Domenica, of Maryland; and six grandchildren: Denon, Madilyn, Nicholas, David, Kyler, and Kinsley. Georgia is also survived by her four siblings: Ray Gustafson and his wife, Tammy, of Arizona, Karen Pividori and her husband, Kevin, of Blairsville, Ronnie Gustafson and his wife, Peggy, of Maryland, and Annie Milazzo and her husband, Christian, of Texas and numerous nieces and nephews. She was preceded in death by her parents. The family will receive friends from 2 p.m. to 4 p.m. and 6 p.m. to 8 p.m. on Tuesday, January 21, 2020 at the Robert V. Burns Funeral Home in Clarion. Mass of Christian Burial will be celebrated at 11 a.m. on Wednesday, January 22, 2020 at the Immaculate Conception Catholic Church in Clarion with Rev. Samuel Bungo, pastor of the Saint Charles Church in New Bethlehem. Interment will follow in the Immaculate Conception Catholic Cemetery. In lieu of flowers, Donations or memorials can be made in Georgia’s name to the Clarion Cancer Center, 150 Doctors Lane, Clarion, PA 16214 or to the Clarion Forest V.N.A. Hospice, 271 Perkins Road, Clarion, PA 16214.

Georgia Ann Simpson, 66, of Sligo, passed away peacefully at her home surrounded by her family Saturday evening, January 18, 2020, after a yearlong battle with lung cancer. She was born on March 2nd, 1953 at the Oil City Hospital; daughter... View Obituary & Service Information

The family of Georgia A. Simpson created this Life Tributes page to make it easy to share your memories.

Georgia Ann Simpson, 66, of Sligo, passed away peacefully at...

Send flowers to the Simpson family.