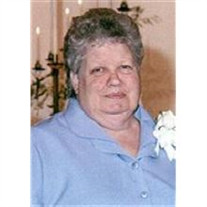 Georgianna Marie Maxwell, 73, of Miola Road, Clarion, died Monday, March 7, 2011, at the Clarion Hospital following a brief illness. Born November 7, 1937, in Oil City, she was the daughter of the late Leo and Pauline Hoover Keim. Mrs. Maxwell married on June 12, 1953 to Archie P. Maxwell, who preceded her in death on April 19, 2010. She and her husband owned and operated Maxwell Busing, where she was a bus driver for 43 years. Mrs. Maxwell was a member of the Shiloh Presbyterian Church in Miola. She was also a member of the Stitch and Chatter Club and Leeper Women’s Club. Mrs. Maxwell was an avid Bingo player and enjoyed knitting, crocheting, camping in Erie, and going to breakfast with her friends. She was survived by five children, Linda Lester and her husband, Dave, of Leeper; Gary Maxwell and his wife, Deb, of Miola; Karen Sue Reaghart and her husband, Linn, of Miola; Marcia Heasley and her husband, Rick, of Leeper; and Dana Scott Maxwell and his wife, Sheila, of Punxsutawney; nine grandchildren, Ben Lester, Abbey Lester, Angela Coleman, Rebecca Maxwell, Jon Byers, Michael Maxwell, John Reaghart, Amanda King, and Kevin Heasley; and six great grandchildren, Kaydee Lester, Kaleb Lester, Gabrielle Coleman, Trinity Weckerly, Bobbi Weckerly, and Nicholas Eaker. Also surviving are a sister, Nancy Jean Keim of Clarion; and a niece, Rosemary Bish of Mayport. In addition to her parents and husband, she was preceded in death by a son, Michael J. Maxwell in April 2002. Family will receive friends from 7 p.m. to 9 p.m. on Wednesday, March 9, 2011, and from 2 p.m. to 4 p.m. and 7 p.m. to 9 p.m. on Thursday, March 10, 2011, at the Robert V. Burns Funeral Home in Clarion and also from 10 a.m. to 11 a.m. on Friday, March 11, 2011, at the Shiloh Presbyterian Church in Miola. Funeral services will be held at 11 a.m. on Friday, March 11, 2011, at the Shiloh Presbyterian Church in Miola with Lay Pastor Marsha Mahle officiating. Interment will be held in the Miola Cemetery. Memorials and donations can be made to Charitable Deeds, 98 Hickory Nut Lane Knox PA 16232, or Ambulance Service, PO Box 13 Leeper PA 16233.

The family of Georgianna Marie Maxwell created this Life Tributes page to make it easy to share your memories.

Send flowers to the Maxwell family.