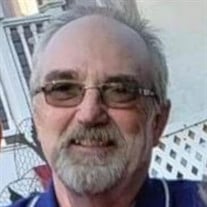 Gerald R. “Jerry” Coull, 66, of Strattanville, passed away unexpectedly of natural causes early Thursday morning, July 16, 2020 at the Clarion Hospital. He was born on January 30, 1954 in Strattanville; son of the late George William Coull and Sally Ann Fike Coull, whom survives. Jerry attended Clarion Limestone High School until he started working as a heavy equipment operator and self-employed truck driver for 20 years. He then worked for PennDOT for 20 years until his retirement. Jerry currently helped run Coull’s Garage in Strattanville alongside his son, Michael and his brother, Jim. You would always find Jerry in the garage tinkering around or riding his motorcycle. Jerry was a devoted son. He would always put his family first and loved to spend time with his grandchildren, who were his pride and joy. He is survived by his mother: Sally Coull of Clarion; his two sons: Robert Coull and his wife, Jessica, of Corsica and Michael Coull and his fiancé, Ann Ramsey of Strattanville, and her daughter, Emmaline; his three grandchildren: Austin, Lexi, and Taylor Coull, all of Corsica; his brother: Jim Coull of Clarion; and his sister: Ginger Elliott of Shippenville. Jerry is also survived by his significant other: Donna Reinsel of Strattanville, and her daughter: Caitlin Whisner of Grove City and the mother of his sons: Tari Lynn Coull of Strattanville. He was preceded in death by his father; and a brother: Jeff Coull. The family will receive friends from 1 p.m. to 4 p.m. on Sunday, July 19, 2020 at the Robert V. Burns Funeral Home in Clarion. Additional viewing will be held from 10 a.m. to 11 a.m. in the funeral home on Monday, July 20, 2020 where funeral services will follow at 11 a.m. with Rev. Randy Leadbetter presiding. Interment will be held in the Cedarview Memorial Park in Strattanville.

The family of Gerald R. Coull created this Life Tributes page to make it easy to share your memories.

Send flowers to the Coull family.