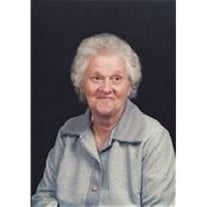 Gertrude C. Matthews, 88, of South Fourth Avenue, Clarion, died Sunday, August 25, 2013, at her residence. Born March 11, 1925 in Clarion; she was the daughter of the late Chambers E. and Clara M. Rapp Ganoe. Mrs. Matthews was married on June 15, 1944, to Glenn B. Matthews, who preceded her in death on August 11, 2010. She was a homemaker and enjoyed reading, cooking, and baking. Mrs. Matthews was a member of the Immaculate Conception Church of Clarion. She is survived by five children, Judi Matthews and her friend, Tom Vosburg, of Strattanville; Sharon Clinger and her friend, Jake Miller, of Shippenville; Glenda Allen and husband, Cliff, of Yuma, AZ; Bob Matthews and wife, Tammy, of Sligo; and Peg Howe and husband, Perry, of Clarion; a daughter-in-law, Frances Matthews of Knox; sixteen grandchildren, twenty-six great grandchildren; and one great great grandchild. Also surviving is a sister-in-law and very dear friend, Joann Ganoe of Clarion. In addition to her parents and husband, she was preceded in death by a son, Donald Matthews, eleven siblings, and two grandsons. Family will receive friends from 2 to 4 p.m. and 7 to 9 p.m. on Wednesday, August 28, 2013, at the Robert V. Burns Funeral Home, 638 Wood Street, Clarion. Christian wake service will be held at 8:30 p.m. on Wednesday, August 28, 2013, in the funeral home. Mass of Christian Burial will be celebrated at 11 a.m. on Thursday, August 29, 2013, in the Immaculate Conception Church, Clarion, with Rev. Monty Sayers, pastor of the Immaculate Conception Church, presiding. Entombment will be held in the Immaculate Conception Cemetery Mausoleum. Memorials and donations can be made to the Clarion Forest VNA Hospice, 271 Perkins Road, Clarion PA 16214.

The family of Gertrude C. Matthews created this Life Tributes page to make it easy to share your memories.

Send flowers to the Matthews family.