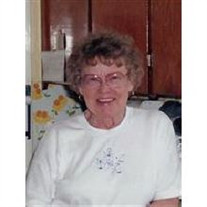 Glenna R. McFadden, of Highland Oaks, Shippenville, formerly of Strattanville, died on Friday, February 20, 2015, at Highland Oaks. Born June 24, 1929 in Bells Landing, Clearfield County; she was the daughter of the late Carey I. and Maude... View Obituary & Service Information

The family of Glenna R. McFadden created this Life Tributes page to make it easy to share your memories.

Send flowers to the McFadden family.