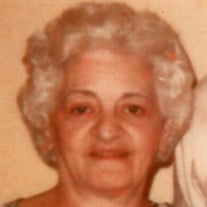 Grace Salvo Kukla, 100, of Shippenville, formerly of Oil City and Clarion, passed away Thursday evening, June 21, 2018 at the Shippenville Healthcare and Rehabilitation Center. She was born on June 15, 1918 in Rimersburg; daughter of the late Joseph and Lucy Montana Salvo. After Grace’s mother’s death in 1927, she was raised by her father Joe and his wife Jennie Petruzzella Salvo. Grace was formerly married to Samuel Froella, Sr. They were blessed with two children, Samuel, Jr. and Lucy. Grace then married Edward John Kukla on May 17, 1969, with whom she shared her life until his death on November 4, 1983. She was a homemaker and previously worked as a cook at the Holiday Inn in Oil City. Grace was a wonderful seamstress and enjoyed making doll clothes for her granddaughters, Heather and Amy, in the past. She was a wonderful cook and was well known for her delicious cream puffs and pizzelles that she lovingly made and shared with her family and friends. Grace was of the Catholic faith and attended the Immaculate Conception Catholic Church in Clarion. She is survived by her daughter, Lucy Ann Beach of Franklin and husband Mike; a daughter-in-law, Joanne Froella of Cochranton; three grandchildren, Heather Marie Papinchak and husband Jason of Cochranton, Amy Lynn Hooks and husband Donald of South Carolina, and Stephen Walentoski of Oil City; four great grandchildren, Tanya Greer and husband Steve, Benjamin Papinchak, and Levi Papinchak all of Cochranton, and Noah Hooks of South Carolina; three great great grandchildren, Cambria, Kiralee, and Jaxton Greer all of Cochranton; three brothers, Charles Salvo and his wife Orena of Alabama, Carmen Salvo and his wife Theresa of Shippenville, and Victor Salvo and Bonnie Huth also of Shippenville; a sister-in-law, Rose Marie Salvo of Brookville; a brother-in-law, Neil Shively of Butler, and numerous nieces and nephews. Grace was preceded in death by her father, mothers, husbands, a son, Samuel F. Froella, Jr., and seven brothers, Peter, Richard “Dick”, Ralph, Angelo, Joseph, Samuel, and an infant brother, Joe Salvo, and two sisters, Josephine Mortimer and Lucille Shively. A Memorial Mass of Christian Burial will be celebrated at a later date, at the convenience of the family. Entombment will be held in the Rimersburg Mausoleum. The Burns Funeral Home and Crematorium, Inc. in Rimersburg is handling the arrangements. In Lieu of flowers, donations can be made to the Rimersburg Mausoleum Association, 21485 Route 66, Shippenville, PA 16254. The family also wishes to acknowledge the doctors and nursing staff at the Shippenville Healthcare and Rehabilitation Center for their care and support during “Gracie’s” stay there. She was dearly loved and will be greatly missed.

Grace Salvo Kukla, 100, of Shippenville, formerly of Oil City and Clarion, passed away Thursday evening, June 21, 2018 at the Shippenville Healthcare and Rehabilitation Center. She was born on June 15, 1918 in Rimersburg; daughter of the late... View Obituary & Service Information

The family of Grace Kukla created this Life Tributes page to make it easy to share your memories.

Send flowers to the Kukla family.