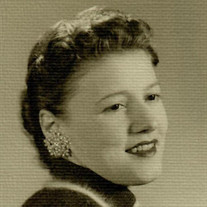 Grace G. Troese, 83, of Clarion, passed away on Thursday, March 19, 2020 at the Clarion Hospital. She was born on July 27, 1936 in Snydersburg; daughter of the late Edward F. Wolbert, Sr. and Genevieve Schupp Wolbert. Grace was the last surviving member of her immediate family. She married Nicholas A. Troese, Sr. on April 30, 1958; whom preceded her in death on May 1, 2006. She worked for the Troese Brothers to include Domenica Foods and also worked for Attorney Bill Strong. Grace was a member of the Immaculate Conception Catholic Church in Clarion, where she was also a member of the Ladies Guild and the Funeral Team. Grace loved spending time and volunteering at church functions and events. She was a dedicated volunteer at the Clarion Hospital. Grace enjoyed baking and cooking, spending time with her friends, and going out to eat. She was a former member of the Red Hats. Grace is survived by her daughter: Renee Braun and her husband, John, of South Carolina; her granddaughter: Natalie Helmick and her husband, Tyler, of Virginia; two great grandsons: Easton and Tanner Helmick, both of Virginia; and numerous nieces and nephews. She was preceded in death by her parents; husband; two sons: Nicholas A. Troese, Jr. and Jeffrey E. Troese; nine brothers: Edward, Quentin, Leander, Norman, Howard, Earl, Gerald, Regis, and Dennis; and two sisters: Virginia Wolbert and Marion Hepfl. Due to the current coronavirus pandemic, a private family viewing will be held at the Robert V. Burns Funeral Home in Clarion, followed by a service with Father Monty Sayers, pastor of the Immaculate Conception Catholic Church in Clarion, presiding. Interment will be held in the Immaculate Conception Catholic Cemetery. A Mass of Christian Burial will be announced at a later date when the coronavirus restrictions are lifted. In Lieu of flowers, Donations or Memorials can be made in Grace’s name to the Immaculate Conception Catholic Church, 720 Liberty Street, Clarion, PA 16214.

Grace G. Troese, 83, of Clarion, passed away on Thursday, March 19, 2020 at the Clarion Hospital. She was born on July 27, 1936 in Snydersburg; daughter of the late Edward F. Wolbert, Sr. and Genevieve Schupp Wolbert. Grace was the last surviving... View Obituary & Service Information

The family of Grace G. Troese created this Life Tributes page to make it easy to share your memories.

Send flowers to the Troese family.