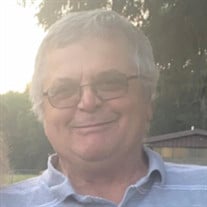 Harry E. “Ed” Wagner, 70, of Shippenville, passed away Thursday afternoon, September 23, 2021 at the Butler Memorial Hospital due to complications with surgery. He was born on December 6, 1950 in Shippenville; a son of the late Paul and Marrion Hunt Wagner. Ed married the love of his life, Wanda Judy, on January 20, 1973, who survives. He worked for PennDOT for 35 years until he retired in 2005. Ed was a member of the Fryburg Sportsman’s Club for many years. He loved to text everyone to tell them how much the book was up to. His idea of a good time was going on long rides with his wife in their side-by-side “around the block” in the evenings to look for deer. Ed’s greatest joy was babysitting his great grandchildren and watching SpongeBob SquarePants and Tom and Jerry with them. He also loved to plow snow and his neighbors will greatly miss that. Ed was a simple man who loved a simple life. He was a very well-known and well-liked man who always had time to help anyone no matter what the task. He will be greatly missed by his family, friends, neighbors, and all the people who knew him. Ed is survived by his loving wife, Wanda of 48 years; two sons, Michael “Mike” Wagner of Shippenville and Bryan Wagner and his wife, Teri, of Leeper; four grandchildren, Nicole Wagner of Clarion, Matt Wagner and his significant other, Megan Kelley, of Shippenville, Bobby Boyer of Indiana, PA, and Cole Boyer of Mechanicsville; and his three great grandchildren, Taylor Wagner, Maylee Wagner, and Zayden Hanley, all of Clarion. He is also survived by his brothers, Bob Wagner and his wife, Rosalyn, of Clarion, Thomas Wagner and his wife, Patricia, of Texas, John Wagner and his wife, Sandy, of Sligo, Merle “Jake” Wagner of Shippenville, Ron Wagner and his wife, Sandy, of Tionesta, Jerry Wagner and his wife, Brenda, of Knox, Roger Wagner and his wife, Sharon, of Shippenville, and George Wagner of Rimersburg; his sister, Betty “Sis” Snyder of Shippenville; and numerous nieces, nephews, great nieces and nephews, and great-great nieces and nephews. Ed was preceded in death by his parents. Family and friends will be received from 1 p.m. to 4 p.m. on Sunday, September 26, 2021 at the Robert V. Burns Funeral Home in Clarion. Funeral services will be held at 11 a.m. on Monday, September 27, 2021 in the funeral home with Rev. Harold O. Jacobson, pastor of the Grace Lutheran Church in Clarion. Interment will follow in the Cedarview Memorial Park in Strattanville.

Harry E. &#8220;Ed&#8221; Wagner, 70, of Shippenville, passed away Thursday afternoon, September 23, 2021 at the Butler Memorial Hospital due to complications with surgery. He was born on December 6, 1950 in Shippenville; a son of the late Paul... View Obituary & Service Information

The family of Harry E. Wagner created this Life Tributes page to make it easy to share your memories.