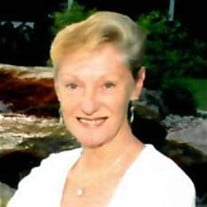 Helen L. McCullough, 74, of Strattanville, passed away unexpectedly of natural causes Sunday evening, February 4, 2018 at her home. She was born on September 1, 1943 in Jenkintown; daughter of the late Joseph A. and Eva M. White Barry. Helen married James W. McCullough in October of 1993, who preceded her in death. She worked at the Clarion Psychiatric Center and Senior Helpers of Doylestown. Helen was a member of the American Legion, the Moose Lodge, and the Eagles all of Clarion. She enjoyed dancing, reading, playing cards, sewing, and spending time with her family. Helen’s greatest achievements were raising her children and reuniting with her oldest daughter. She is survived by her three children, A. Robin Felton of Collegeville, Diana E. Dennison of Strattanville, and Alycia C. Dennison of Southampton, her two stepchildren, Edward L. Dennison and his wife Theresa of Galeton and Tracey A. Fidler and her husband Allen, Sr. of Orwigsburg, and eight grandchildren, Trevor Buckley and his fiancé Hannah Ruby, Briana Phillips, Emilee Facciolo, Chris Dennison, Joey Dennison, Kristyn Fidler, Nicole Fidler, and Allen Fidler, Jr. She is also survived by a sister, Doris Roush of Florida. Helen was preceded in death by her parents, husband, and her siblings, Mildred Gladys Steele, Joseph A. Barry, Eleanor Barrett, Edward Barry, and John Barry. In Lieu of flowers, at Helen’s request, “Pay it Forward” feed a few hungry families instead, pay a bill for someone having money trouble, or tell others to use their time/money to do something of value for someone in need. There will be a gathering at the Clarion Moose Lodge #101 for a Celebration of Helen’s Life from 2 p.m. to 5 p.m. Tuesday, February 13, 2018. All friends and family are welcome.

Helen L. McCullough, 74, of Strattanville, passed away unexpectedly of natural causes Sunday evening, February 4, 2018 at her home. She was born on September 1, 1943 in Jenkintown; daughter of the late Joseph A. and Eva M. White Barry. Helen... View Obituary & Service Information

The family of Helen L. McCullough created this Life Tributes page to make it easy to share your memories.

Send flowers to the McCullough family.