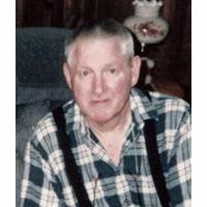 Herbert H. Craig, 84, of Ridge Avenue, Strattanville, died Saturday, December 15, 2012, at the Golden Living Center in Clarion. Born September 5, 1928 in Sligo; he was the son of the late Thomas Hobart and Mary Agness Hartman Craig. A veteran, he served in the Marine Corp from 1948 to 1952 in Korea. Herbert was married on June 26, 1973 to the former Nancy Lee Wilson, and she survives. He worked in construction for Bracken’s Construction in Sligo.  He then worked as a life insurance salesman for American Family Life, where he retired. In addition to his wife, he is survived by four children, Bernard Craig and his wife, Shirl, of Slate Lick, Sharon Curtis and her husband, Larry, of Chicora, Denis Craig and his wife, Carla, of Pittsburgh, and Mari Long of Strattanville; three stepchildren, Melissa Furl of and her husband, William, of Karns City, Mark Frampton and his wife, Jan, of Ohio, and Christine Stimac and her husband, Mike, of East Brady; and fourteen grandchildren and numerous great grandchildren. Also surviving are five siblings, Mary Wright, Luella Mong, Barbara Hatt, Hobart Wayne Craig, and Robert D. Craig. He was preceded in death by his parents; two infant children, Janice and Eugene Craig; and six siblings, Edwin Craig, Agness Mailes, Ana Belle Prichard, Thomas Craig, Elise Grazier, and Connell Craig. Family will receive friends from 2 to 4 p.m. and 7 to 9 p.m. on Thursday, December 20, 2012, at the Robert V. Burns Funeral Home, 638 Wood Street, Clarion. Military honors will accorded at 10:45 a.m. on Friday, December 21, 2012, by American Legion Post #66 of Clarion. Funeral services will be held at 11 a.m. on Friday, December 21, 2012, in the funeral home.

The family of Herbert H. Craig created this Life Tributes page to make it easy to share your memories.

Send flowers to the Craig family.