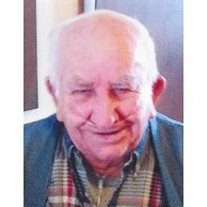 Herbert Clair Work, “Jiggs” to all those who knew him, was called from this life to his reward on March 7, 2017. He died peacefully surrounded by family at the Clarion Healthcare and Rehabilitation Center. He was 88 years old. Jiggs lived in Strattanville, PA until moving to the rehabilitation center in 2015. He was born on December 23, 1928 in Strattanville, PA to Harrison Clair and Minnie Estelle Work. He was the youngest of their five children. He married Bonnie Strohmyer in October of 1959, and she preceded him in death in 2011. Jiggs joined the Air Force in 1948 and spent his four years on the airbase in Tachikawa, Japan. While there, he finished his high school education and went on to learn to speak the Japanese language. He made friends from there which he kept in touch with through the years. Upon his discharge from the Air Force he attended and graduated from The Blair County School of Auto Mechanics. His love of trucks turned into his life profession and he spent over fifty years on the road doing long hauls. He retired from Womeldorf, Inc in 1991 and thoroughly enjoyed his retirement visiting with many friends and working in his garage. A favorite hobby of his was building cars and trucks out of bolts, washers, screws and metal which he gave to friends and family. Jiggs was a loving, kind, and generous man who enjoyed talking, visiting and eating. He had a great sense of humor and was always quick with a story and a joke. He was an animal lover and had many pets throughout the years. His greatest love was his family and grandchildren with whom he spent many Sunday afternoons having dinner after church. He will be sadly missed by those who knew and loved him. He leaves behind a son, Kevin Work of Ellijay, GA and a daughter, Wendy Haws and her husband Gary of Clarion, PA, grandchildren, Danyielle Haws Komar and her husband Andy of McMurray, PA, Jesse Work, of Strattanville, PA, Christian Haws of Cleveland, OH, Jamie Work Latshaw and her husband Cody of Fisher, PA, Wendyl Haws Mealy and her husband Jon of Tionesta, PA, George Haws of Clarion, PA, and Laura Work of Ellijay, GA. great grandchildren Ashton, Oliver, and Vienna Komar, Carson and Gabriel Work, Dylan and Alivia Latshaw, Violet and Lucille Mealy, and numerous nieces and nephews. He was preceded in death by his parents, two sisters, Letha Ace and Maggie Johnson and two brothers Wendell and Bud Work. Jiggs was a Christian and attended the Alpha Assembly of God. A Memorial Service will be held at the Alpha Assembly of God in Clarion, PA on Saturday March 18, 2017 at 11 am with Pastor David Selleck presiding. In lieu of flowers or gifts, the family requests donations be made to The Clarion Hospital Foundation at One Hospital Dr. Clarion, PA. The Robert V. Burns Funeral Home in Clarion is handling the arrangements.

Herbert Clair Work, &#8220;Jiggs&#8221; to all those who knew him, was called from this life to his reward on March 7, 2017. He died peacefully surrounded by family at the Clarion Healthcare and Rehabilitation Center. He was 88 years old. Jiggs... View Obituary & Service Information

The family of Herbert C. Work created this Life Tributes page to make it easy to share your memories.

Herbert Clair Work, “Jiggs” to all those who knew him, was called...

Send flowers to the Work family.