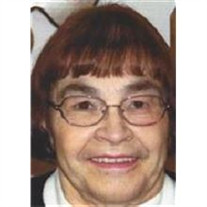 Irene Geneveive Etzel, 71, of Clarion, died unexpectedly Thursday, April 19, 2012 in Allegheny General Hospital surrounded by her family.  Born on January 29, 1941, in Strattanville, she was the daughter of Paul Patrick and Alice Lorena Freeborn Clinger. Irene was married on February 20, 1960 to William “Bill” Etzel, and he survives. She attended Clarion-Limestone High School and was an active cheerleader.  She was employed at the Owens-Illinois Glass Plant (Clarion, PA) in her early years.  After the birth of her children, she devoted herself to being a full-time homemaker.  She enjoyed crafts, painting, decorating and gardening. She loved serving as a den mother for her sons in the Cub Scouts and as a Brownie Troop leader for her daughter.  Her pure joy was to be “Memaw” to her grandchildren. Irene was an active and devoted member of the Immaculate Conception Church in Clarion and served on various church committees throughout her life. She leaves behind a loving and devoted husband of 52 years, William, “Bill” Etzel of Clarion, sons, David Etzel of Lamartine, and Brian Etzel and his wife, Laurie, of Austin, TX; and a daughter Lisa Etzel, of Austin, TX. Also surviving are her brother, Jim Clinger, of Grand Rapids, MI; and her sisters, Nancy Duggan and her husband, John, of Charlotte, MI; Bonnie Jones and her husband, Bob, of Olivet, MI; Norma Martin of Clarion; Linda Shepard of Lansing, MI; and her grandchildren, Jamisen Etzel, Spenser Etzel, Madelyn Etzel, Ezra Etzel and Kyle Etzel. She was preceded in death by her mother and father Paul Patrick and Alice Lorena Clinger of Clarion; her mother and father-in law Albert and Sarah Etzel; her brother Lou Clinger; and her sister Mary Jones. Family will receive friends from 2 to 4 p.m. and 7 to 9 p.m. on Monday, April 23, 2012, at the Robert V. Burns Funeral Home, 638 Wood Street, Clarion. Wake service will be held at 8:30 p.m. on Monday, April 23, 2012, in the funeral home. Mass of Christian Burial will be celebrated at 11 a.m. on Tuesday, April 24, 2012, in the Immaculate Conception Church, Clarion, with Rev. Monty Sayers, pastor of the Immaculate Conception Church, presiding. Entombment will be held in the Immaculate Conception Cemetery Mausoleum. Memorials and donations can be made to County Homemakers, 213 Hahne Court, DuBois, PA 15801or to the Clarion Forest VNA, 271 Perkins Road, Clarion PA 16214.

Irene Geneveive Etzel, 71, of Clarion, died unexpectedly Thursday, April 19, 2012 in Allegheny General Hospital surrounded by her family.&#160; Born on January 29, 1941, in Strattanville, she was the daughter of Paul Patrick and Alice Lorena... View Obituary & Service Information

The family of Irene G. Etzel created this Life Tributes page to make it easy to share your memories.

Send flowers to the Etzel family.